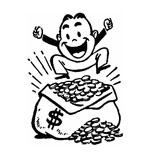 By Jason M. Morgan | July-August 2021
Jason M. Morgan, a Contributing Editor of the NOR, teaches history, language, and philosophy at Reitaku University in Kashiwa, Japan. He is the author, most recently, of Law and Society in Imperial Japan: Suehiro Izutarō and the Search for Equity (Cambria Press, 2020).

Readers of a certain age can close their eyes and call to mind the curlicued British accent of Robin Leach. “Champagne wishes and caviar dreams,” Leach intoned from TV screens in the 1980s, amid scenes of faintly ridiculous, aging Croesuses in sailing caps and white pants ogling nubile co-eds on sprawling yachts anchored off the coast of Mallorca. The “lifestyles of the rich and famous” that Leach paraded before the envious masses included polo games and fox hunts, long drives through the French countryside in Italian convertibles, fireside dining in cozy mountain getaways, and plenty of swishing, smile-flashing, improbable impromptu twirling, and carefree toasts raised to the usual gods of money, influence, buxom companions, and style — oodles of style. Some people in the world really did have it all, and Leach’s job was to needle the rubes with the excesses of their inaccessible betters.

America is a democratic country, however, and when we saw the jet set living large in Aspen, Miami, and the French Riviera, we wanted in on it. Lifestyles of the Rich and Famous lasted into the angsty 1990s, but it was eventually overtaken by kitschier riche. The 1990s saw a kind of democratization of the socialite Leachism of the 1980s. MTV, for example, brought us Cribs, in which nouveau celebrities who lacked style, class, and taste, but who had plenty of dough, showed us around their obscenely outsized mansions. These people from humble beginnings, who in a sane society would be in reform school, flaunted refrigerators the size of minibuses, garages filled with mammoth SUVs, and creepy bedrooms done up in licorice colors with mirrored ceilings.

Yet the garishness of this latest batch of bajillionaires was not accessible to the masses until the debt economy inflated the cash bubbles that emerged in the 1980s. All the high living remained out of reach to anyone who had no talent for corporate raiding, rapping or crooning, or running around with footballs or basketballs — until the great democratization of the stock market after the dotcom crash of 2000, when the Era of the Credit Card had truly arrived. The more unsustainably the debt economy towered topplingly into the sky, the more we bought into the mentality of the IOU.

The country dipped into darkness in September 2001, and the boom times of the 1990s gave way to the Anxious Aughts, a time of fear and suspicion — and meteoric rises in the stock market. War, it is said, is the health of the state, and Visa and MasterCard are the state’s personal physicians. When the federal government was feeling its oats in Mosul and Kabul, Wall Street was posting record gains.