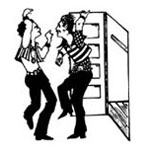 The Rush to Radical Informality

NOTES FROM A CULTURAL NO-MAN'S LAND

By Frederick W. Marks | January-February 2012
Frederick W. Marks is the author of eight books on history and religion, most recently A Catholic Handbook for Engaged and Newly Married Couples (also available in Spanish).

What is going on? Jane Austen screen adaptations featuring manners and magnificence are grossing millions. School uniforms are gaining traction. Dominican nuns in full habit are attracting a record number of postulants. At the same time, resort dining rooms that once required a coat and tie for the evening meal no longer do so. A recent Time magazine “Person of the Year” was shown in baggy jeans and T-shirt. It is difficult to find a concert of classical music that does not include at least one piece of grating dissonance sandwiched in between the standard orchestral favorites to prevent the audience from voting with its feet.

We are smack in the middle of a cultural no-man’s land due, in large part, to conflicting interpretations of modern history. Some hail the present as a golden age in which racial bigotry and male chauvinism have been checked. They take pride in such things as three-point seatbelts and compost bins. Others, shocked to see a society mired in porn, recall a time when women were not persuaded en masse to fornicate, contracept, and abort, and when mothers were not under intense pressure to abandon the home for the workplace. While they welcome advances in technology and environmental protection, they shudder at the thought of fifty-three million babies slaughtered in the womb since the passage of Roe v. Wade. Small wonder that a recent study of mental health in fifteen major nations tagged the United States with the highest rate of depression.

To put it another way, some measure success in terms of skyscrapers, intercontinental ballistic missiles, and aggregate family income, while others find it hard to reconcile a huge increase in single-parent homes with the notion of a happy, healthy society. Members of the latter group are keenly aware of what Prof. Lawrence Stone of Princeton University observed over a decade ago, that “the scale of marital breakdown in the West since 1960 has no historical precedent.”

The wearing of baggy jeans and a T-shirt when dressier attire is appropriate could be nothing more than a gimmick to attract attention — the kind of thing hoods do when they rev up their motorcycles. More likely, the motive runs deeper. Long ago, Frances Trollope and Alexis de Tocqueville slammed Americans for their lack of refinement. But such criticism, coming from the pen of foreigners, served merely to invest spittoons and tobacco-chewing with an air of patriotism. Just as Democrats adopted the donkey as a party symbol after hearing it used against them as a term of opprobrium, there are some today who delight in radical informality because they see it as emblematic of the spirit of American democracy. Still others aim to project an air of tolerance at a time when tolerance has been elevated to the status of a virtue.

Liberalism is, in its essence, universal sovereignty premised on the expendability of life inside the individual’s sovereign domain.