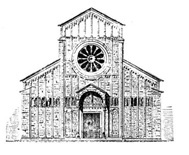 Why We Need Beautiful Churches

By Giles Dimock | June 1997
The Rev. Giles Dimock, OP, is Professor of Theology at Franciscan University in Steubenville, Ohio.

My earliest memory of being in a church is the one I experienced as a tot one Good Friday when my mother took me to venerate the Cross. I can still see in my mind’s eye the crucifix with its silver corpus lying on a purple pillow at the entrance to the sanctuary. I remember bending over to venerate the crucifix and I recall the soft fight coming through the stained glass windows, the dark wood altar and communion rail, and the statues of Our Lady and St. Joseph. I was mightily impressed with God’s House, and knew it was different from other places. I’m not sure if I had been taken to a contemporary concrete bunker that passes for a church these days whether my reaction would have been the same.

Why are so many modern church buildings so barren? Why have so many lovely old Irish Victorian church edifices, neo-basilican or neo-classical structures, been stripped and whitewashed away? Some of our old churches may not have been great architecture, but at least they were devotional, replete with stained glass and murals of biblical scenes, peopled with statues of our friends, the saints. Little votive lights twinkled, welcoming the passerby in for prayer or, more importantly, the parishioner for Mass. The “noble beauty rather than sumptuous display” mandated by Vatican II in its Constitution on the Sacred Liturgy (n. 124) has been interpreted as bareness, and the same document’s caution that sacred images have right order in their positioning and number (n. 125) has been used to justify not having any images at all. Some see little difference between a church structure and a meeting hall.

All this raises the questions: Are beautiful sacred buildings needed? Can’t we, the Body of Christ, worship anywhere? To attempt to answer these questions we must briefly consider the history and psychology of worship in the Scriptures and the tradition of the Church.

The anthropologist Mircea Eliade, in his Patterns of Comparative Religions (1958), documents the fact that ancient peoples in many parts of the world deemed places to be holy where some manifestation of the “holy” or “divine power” transforms a place into a sacred place with transcendent meaning. The places, whether mountains, hills, caves, rocks, groves, etc., then become broadly speaking “sacramental,” visible signs of invisible realities. That God made use of man’s need for such signs in his revelation to the people of the Old Covenant is clear in his singling out Mount Horeb and Mount Sinai for his theophanies to Moses, or from the Oaks of Mambre being sacred to Abraham, or the holy stone at Bethel being sacred to Jacob. But it is the tabernacle (or tent), and the Temple as its successor, which is the sacred place par excellence for the Israelites. Wandering Semitic tribes had portable tent shrines, and so God commanded the people “to build me a sanctuary so that I may dwell among them” (Ex. 25:8). The tent sheltered the Ark of the Covenant, which was important not so much for what it contained (manna, tablets of the Law, and the Urim. and Thummin) as for the Shekinah, the presence of God which hovered over the decorative cherubim which crowned the Ark. Thus the presence of God manifested by the pillar of cloud by day and the pillar of fire by night was “incarnated” in the portable ark which was enthroned in its own tent shrine when the pilgrim people came to rest and pitched camp. However, when the Israelites were established in the Promised Land and the Kingdom was firmly established, there was a desire to have a permanent Temple. King David wished to build it, but God made his contrary will known (2 Sm. 7:1-7) and David, who was considered a man of war, was passed over for his son, Solomon, whose name means “the peaceful king.” To him is given the task of building a temple of three sections: the vestibule, the Holy Place, and the Holy of Holies with the Shekinah, presence of God. It will be added to later, but the precise architectural plan is less important than the place it held in Israel’s heart and devotional life. The Temple became the religious center of Israel, the object of cult and devotion to devout Hebrews. There were pilgrimages to visit the Temple, and as the pilgrims neared the great edifice they sang the Gradual Psalms (120-134) or Songs of Ascent as they ascended Mount Zion where the Temple was. Some theorize that the whole Psalter was a collection of songs accompanying feasts celebrated in the Temple liturgy.

Archbishop Sean O’Malley made the following statement on July 29,…

Reviews of Discipline That Lasts a Lifetime by Ray Guarendi... The Privilege of Being a Woman by Alice von Hildebrand... Journey of Faith: Catholic Marriage Preparation by Deacon Roy Barkley...