Volume > Issue > What to Do With That "Ferrari" Organ? 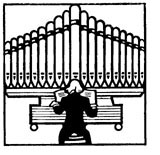 What to Do With That “Ferrari” Organ?

By Mike Dodaro | September 2000
Mike Dodaro is a musician and, in self-defense, a computer programmer.

The pastor says the organ we have at St. Joe’s (not the real name) “is a Ferrari.” He’s right about the quality of the instrument, but he didn’t intend his evaluation as an endorsement of the full-throated magnificence of the organ. He’d like to trade it in for a small electric console. “The musicians worship the organ,” he adds with annoyance. “The people hate it!”

Do the folks at St. Joe’s really hate the organ? I’d say most people seem indifferent. “It’s too loud,” says the pastor. “If you ask the organist to pipe down, it gets worse…. You can’t tell him anything.” So he used to say, anyway. The organist resigned recently.

So things have simmered down somewhat. The pastor says that the organ will be played again at full tilt only when God Himself comes down in one of our liturgies, because the sound is just too grandiose for any lesser occasion. My wife, on hearing this, objected, “Doesn’t God Himself come down at every liturgy?” This eucharistic point is not likely to change the pastor’s opinion. Nor is suggesting that some of us need musical intimations of God’s grandeur when He is (ostensibly) absent. The “Ferrari” is now used for the musical equivalent of trips to the market for groceries. Or, to be more exact, the pastor has found a new organist who doesn’t mind keeping the fiery machine down to almost an idle.

And thus we enter into yet another vexing of the endlessly vexed question of the parish music program — a question that troubles many parishes.

Pennsylvania built the first Catholic churches in the U.S., and its music gained renown even among non-Catholics.

Psalm tones were used in Jewish synagogues and may have been the model for the chant sung in the early Christian Church.