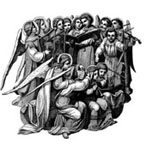 By Lucy E. Carroll | June 2012
Lucy E. Carroll, D.M.A., is the organist at the Carmelite Monastery of Philadelphia, and a former adjunct associate professor at Westminster Choir College, Princeton. She is the editor of The Monastery Hymnal, which is in use in a number of Carmelite monasteries. Her articles on sacred music have appeared in The Adoremus Bulletin, and her Churchmouse Squeaks cartoons appear there monthly. Her most recent publications are The Hymn Writers of Early Pennsylvania (Xulon Press, 2008) and The Music of Ephrata (Ephrata Cloister Associates Press, 2010).

The post-Vatican II Church hastened to rid our parishes of sentiment-filled art, texts, and music. In the aftermath of the Council, sterility became the new goal: walls once covered with art became blank canvases; music that tugged at one’s heart was replaced by pseudo-folk and bubble-gum pop tunes; hymn texts that elicited strong feelings toward the Creator, the Son, the Spirit, and the Virgin Mary were tossed out, along with vivid textual imagery and symbolism. It seems to have been forgotten that exterior signs serve to remind us of inner beliefs and feelings. Removing the externals too often erodes the internal. Overly trite and tawdry sentimentalism has no place in Catholic liturgy. But honest sentiment, born of genuine human emotions drawn through the senses, helps root one in faith and sincerity. Where to draw the line, however, can be difficult to determine.

The traditional Lourdes hymn “Immaculate Mary” has any number of text variants worldwide. In the English-speaking world, Jeremiah Cummings (1814-1866) wrote “Hail Virgin of Virgins,” which later morphed into texts for “Lourdes Hymn,” an early title given to “Immaculate Mary.” In 1905 Edmunds Tozer included some eleven verses in his hymnal. The Monastery Hymnal we use at the Carmelite Monastery where I am the organist retains the first verse from the original version:

Immaculate Mary, our hearts are on fire
That title so wondrous fills all our desire.

While our choir, nuns, and regular congregants sing out that emotional text, new visitors — before looking in our hymnal — often start to sing the current revised text:

Immaculate Mary, your praises we sing
You reign now in splendor with Jesus our King.

Within seconds, the heads of the visitors bend down to the hymnal, and the rest of the hymn text is sung more uniformly.

Why the Music Is So Bad

From the beginning of recorded time, it has been man’s instinct to raise his voice…