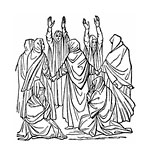 ON HUMANISM & BEING HUMAN

By James V. Schall | November 2018
James V. Schall, S.J., is Professor Emeritus in the Department of Government at Georgetown University. Among his many books are The Order of Things, On the Unseriousness of Human Affairs, The Modern Age, The Mind That Is Catholic, and, most recently, The Universe We Think In (The Catholic University of America Press) and On Islam: A Chronological Record, 2002-2018 (Ignatius). Fr. Schall’s last lecture at Georgetown, “A Final Gladness,” can be viewed on YouTube.

“Modern thought is short on arguments justifying the existence of men.”

— Rémi Brague, The Legitimacy of the Human

“In Aristotle’s opinion the better part of man is his weakest part, and his ‘humanity’ — the things most proportionate to his human nature — is at once the strongest thing in him and the less good part. Now the Roman virtue of humanitas could be cultivated only where man was indeed considered the best thing in the world. The new sense of ‘brotherhood’ of which scholars speak in presenting the development of political thought in this period was new because it was based on a love of man for himself as a being than which there is none better in the universe.”

What happens to men in reality usually has already happened to them in thought. Studying intellectual history is, therefore, by no means a waste of time. It is, in fact, what we should spend much of our energy on. A small error in the beginning, Aristotle told us, leads to a huge error in the end. Thus, even deviant and erroneous ideas should be thought about. The knowledge of error is itself a good, if we can ascertain where erroneous ideas come from and where they will likely lead. The question of what justifies man being man is usually asked only after it becomes obvious that man may, by his own choice, cease possessing what it is to be man as a true and original gift of nature.

A collection of my essays on G.K. Chesterton is called The Satisfied Crocodile (The American Chesterton Society, 2017). The title comes from an observation of Chesterton’s. Let us suppose, he said, that a man eats or drinks too much, to the point where it is ruining his life. Seeing this situation, a friend takes him aside and bluntly tells him, “Be a man!” That is, rule yourself. Stop doing what is causing the problem.

In contrast, suppose we come upon a crocodile that is satisfied because it has just consumed its tenth missionary. We do not say to the animal, “Be a crocodile!” That’s because it is being a crocodile. Crocodiles, by nature, eat and enjoy what comes their way, even missionaries. Man, however, can only be a man if he decides to be what he already is, what he ought to be. His “being a man” includes his ruling himself. That’s the kind of being he is. Plato made the same point at the beginning of The Republic when Socrates observed that we do not return a borrowed sword to a madman, even if the sword is his.

I cite this crocodile story in the beginning of my comments on Rémi Brague’s insightful new book The Legitimacy of the Human (St. Augustine’s Press) because it indicates to us what his book is about. It is not so much about why it is alright to be a crocodile or a man, but why man is not an aberration in the universe. Why is man supposed to become what he is? The initial sentence from Brague’s book, cited above, indicates that some philosophers think that men should not exist at all or, if they do, that they should not exist as they are understood in the classical and revelational traditions. Men need to be “reconstructed” according to some other plan.

What Is a Patriot to Do?

In Chesterton's view, the English people dominated their history — at least until the rise and ultimate dominance of Parliament.

Review of The Collected Works of G.K. Chesterton; Vol. I and Vintage Muggeridge edited by Geoffrey Barlow