Volume > Issue > G.K. Chesterton, a Curmudgeon for Our Times 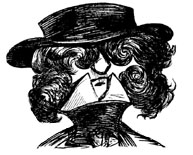 G.K. Chesterton, a Curmudgeon for Our Times

I got a bit worried the other day when a friend told me I was sounding “more and more like G.K. Chesterton” in my volleys against much of our contemporary cultural consensus. I didn’t know Chesterton save by reputation — a “conservative” and a curmudgeon. So I went to the library and snagged his essay collection called Heretics. Much of it spoke to the very particular figures of his time and, since I didn’t know them, I passed these bits by quickly, nevertheless enjoying the way Chesterton sallies forth, a twinkle in his eye and indelible ink on his pen, to take them on. But I couldn’t “get into it,” as we like to say these days.

As for the rest, well, I was both charmed and instructed. Charmed because the fellow knows how to write — always a pleasure for an academic dulled by the dead prose of the academy — and instructed because the fellow knows how to think, perhaps an ever rarer virtue these days. So much of what exercised Chesterton in his epoch continues to haunt us; indeed, if anything, Chesterton possessed the uncanny ability to foreshadow our own raging discontents. For example, in an essay on “Heretics,” he makes the incontrovertible (but often forgotten) point that blasphemy “depends upon belief and is fading with it. If anyone doubts this, let him sit down seriously and try to think blasphemous thoughts about Thor. I think his family will find him at the end of the day in a state of exhaustion.”

With a slight shift of emphasis, Chesterton’s observation helps us think about our own version of that banality sometimes called evil. I have in mind, say, Madonna’s shenanigans, all the exhibitionistic self-referentiality and the bold declarations of what could scarcely be more drearily conformist. Those who would visit down hail and brimstone on her head have got it wrong — it is like thinking blasphemous thoughts about Thor. Madonna isn’t really evil, just banal. Moreover, Chesterton helps out on “good” as well as “evil” when he notes, in his essay “On the Negative Spirit,” that much popular phrasemaking “is a dodge in order to shirk the problem of what is good.” Thus much of our talk of liberty, including leaving “all these arbitrary standards” behind in order to “embrace liberty” more fully, is just another way of saying, “Let us not decide what is good, but let it be considered good not to decide it.” A neat trick, perhaps, but pretty thin gruel if you think about it for more than the time required to shout “Oprah Winfrey.”

So, modern-minded people don’t burden their young people with talk about responsibility, preferring to give them condoms.

Man does not make himself. Rather, as Aristotle remarked, he is already man when he begins to wonder what he is and why he is as he is.

The Many Identities of GKC

A review of G.K. Chesterton: A Biography