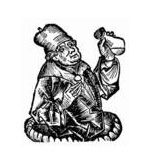 ANCHORLESS ON THE SEA OF CULTURE

By Heather M. Erb | March 2010
Heather M. Erb is Assistant Professor of Philosophy at Lock Haven University of Pennsylvania. She has extensive teaching experience at the undergraduate and graduate levels at several major universities, including Fordham, Penn State, University of Toronto, and St. Francis University. She lives with her husband and three children in the Diocese of Altoona-Johnstown.

Pope Benedict XVI’s tenacity for truth and beauty is becoming a driving force to lead seekers of every stripe and faith background out of relativist blind alleys and postmodern cultural despair. “Anyone who claims to be serving truth,” he has warned, “must be prepared to be regarded as an enthusiast or a fanatic.” The bond between truth and community has vexed thinkers since time immemorial. In the Preface to his commentary on the Politics of Aristotle, St. Thomas Aquinas examines the link between reason and community. His comparison between crafts such as shipbuilding and human community reveals that order in society resembles the unity of timbers in a ship — both involve the direction and rule from reason.

Reason is at work in the architectural plan for the vessel in the shipwright’s mind and in the shipbuilders’ laying of the keel and mounting of the oars. A pattern of reason is embedded in the structural organization of the timbers, mast, outriggers, and sails, and in the purpose, function, and direction of the ship.

While our practical reason enables us to construct artifacts like ships to serve men, it can also rise to form an order among the men themselves. The latter is the work of politics — the artful promotion of the “common good.”

When applied to society, reason has an even more active role than in the creation of artifacts. Reason’s tasks are many. It imposes order by creating artifacts of various types; it creates an order within itself in the search for wisdom and in the soul and society through moral action; and it contemplates order in God’s creation outside the soul. In its political context, reason not only acquires the practical goods necessary for survival, but also the cultural goods that define community as properly human. The goods of liberty, truth, and beauty are paramount among the cultural values that form and permeate the common good of human community.

We modern men and women are ambivalent about our bodies. We’re not sure if we…