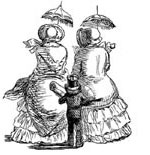 Despite the century and a half separating their lives, the English writer Jane Austen would have undoubtedly offered tea to the French philosopher René Descartes had they chanced to meet. And so it happened that once upon a time, near Christmas, she looked out her front window upon the streets of Bath. Through the gently falling, large snowflakes, she saw her friend Mrs. Tatham passing by with a small company. She called for them all to come in and warm themselves. Gathered around a lively fire, the company included several ladies, an aged vicar, and Mr. Descartes, who was introduced with much formality to Miss Austen.

Mr. Descartes sat silent and aloof as the ladies bantered and sipped from their Wedgwood teacups, an intense look about his eyes. At last, Mrs. Tatham playfully ventured a question to him. “Sir,” she said, “I know that you are a great mathematician and have something to say on arriving at certainty in any field of knowledge.” The chatter died away, and all eyes turned to the philosopher. “Well,” Mrs. Tatham continued, “Miss Elie, here, is trying to decide whether or not to marry the young gentleman in the large house at the end of this street. Can you help her?” Mr. Descartes did not catch the mischievousness in Mrs. Tatham’s eyes, but Miss Austen acknowledged it with a wink at her friend.

Without even glancing at poor Miss Elie, the philosopher began telling the story of his great discovery as a young man. Plagued by skepticism, he craved intellectual security. One day he realized that thought could be independent of things. This meant that the absolute certainty of mathematics could be achieved in all other areas of life. He needed no recourse to others or to the past. He needed only to consult his reason alone. He would doubt everything and allow into his mind only those ideas that were clear and distinct, beginning with his own existence. He could build up a structure of certain knowledge within his mind and then transfer that certainty to reality outside.

After this lengthy speech, a servant refilled the aged vicar’s teacup; Mrs. Tatham yawned; Miss Austen continued to direct her steady, level gaze at the philosopher, pondering; and the others wondered how this method could help Miss Elie, even while offering obsequious praises of the obvious brilliance of Mr. Descartes.

In his Confessions St. Augustine recounts an episode from his childhood in which he and…