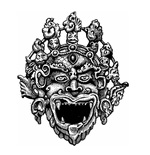 Living in the San Francisco Bay Area, one becomes accustomed to seeing strange things. People from all parts of the country come here to “be themselves,” to find other like-minded, eccentric individuals who tolerate people from all walks of life. As a veteran of this milieu, I thought I had seen it all. A few months ago, however, I saw something that finally made me do a double-take. While driving through the industrial city of Emeryville, on Berkeley’s southwest border, I observed a few colorful banners waving in the wind high aloft an office building. A few more blocks ahead I saw banners of the same style, this time at ground level. A couple days later I finally got out of the car to get a closer look at these banners. I saw on them the image of a Buddha-like figure accompanied by some foreign script. I knew immediately that these were Tibetan prayer flags.

Part of me was not surprised, but still this was a little odd. After all, have not entire court cases been fought over the constitutionality of crèche scenes and crosses in public areas? If someone had put up a roadside shrine to the Virgin Mary like the ones seen in many countries of Latin America, would people really think it so benign? Was this not a public sidewalk? Why do I have to be exposed on this corner to the talismanic objects of Tibetan Buddhism?

Later, I began to notice these flags popping up in other places. My new neighbors put them up on their balcony. People down the block hung them from their porch. A trendy café in north Berkeley has a whole colorful array of them on its porch. There is a very public shrine featuring these flags outside the Asian Art Museum in San Francisco, right down the block from city hall.

The flags themselves are not aesthetically unpleasing. It’s just ironic that people whose ideological forebears fought so hard to keep religion out of the public sphere are now letting their “spiritual” side show a little bit by flying the flag of a very old and elaborate religion. One can assume, of course, that they haven’t actually converted to Buddhism. They probably couldn’t tell you what a bodhisattva is or how many levels are in the bardo plain. They just like the flags. It makes them look chic. It gives them “lucky mojo.” It is a symbol of their solidarity with the oppressed Tibetan peoples. Et cetera, et cetera.

Centurions of the New Age

A "humanitarian" blogger calls the Prayer of the Centurion (Lord, I am not worthy that you should enter under my roof) one of the "most destructive phrases in human history."

When it comes to the science of living (wisdom), we would do well to acknowledge that our ancestors, who could not fly to the moon, knew better than we how to live.