Volume > Issue > The Virtue of Anger & the Sin of Wrath 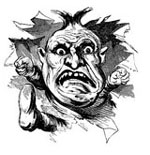 By Mitchell Kalpakgian | June 2014
Mitchell Kalpakgian, a Contributing Editor of the NOR, who has been a visiting professor of literature at Thomas More College of Liberal Arts and at The College of Saint Mary Magdalen, teaches at Mount Royal Academy in Sunapee, New Hampshire. He is the author of numerous books, including The Marvelous in Fielding's Novels, The Mysteries of Life in Children's Literature, and, most recently, The Virtues We Need Again: 21 Life Lessons from the Great Books of the West.

The sin of wrath belongs in the category of the seven capital vices, while righteous anger belongs in the category of the moral virtues. In “The Parson’s Tale” (Canterbury Tales) Chaucer’s Parson explains that the sin of wrath has many symptoms, such as uncontrollable arguing and offensive language, and leads to violent consequences, such as hate, revenge, and murder. Quoting St. Augustine, the Parson remarks that “almost all the harm a man does his neighbor results from wrath.” Wrath “robs a man of his wit and reason” and “steals away a man’s peace of heart, and subverts his soul.”

As Dante reveals in Purgatorio, the image of wrath is an unchecked, raging fire that leads to wanton destruction. For their penance, the wrathful stumble in blindness and choke in the cloud of smoke produced by their vindictive anger: “And some there are whose wrongs have turned them sour, / So that they thirst for vengeance, and this passion / Fits them to plot some mischief any hour.”

St. Basil the Great observed that wrath “makes the human being entirely like a wild beast” (On the Human Condition). “As venom is in venomous animals,” Basil explained, “so temper becomes in those who are provoked.” According to the saint, the deadliness of wrath leads to “unbridled” tongues and “unguarded” lips, and climaxes in “a kind of short-lived insanity.” Wrath progresses along a course from choler to abuse to fighting and, finally, to murder.

Righteous anger, on the other hand, is not fated to degenerate into deadly wrath. “Be angry but sin not,” the Psalmist exhorts (Ps. 4:4). To be human is to be subject to joy and sorrow, fear and hope, love and hate. The practice of the moral life cultivates the proper ordering of these emotions so that rational persons love the true, the good, and the beautiful, and hate the false, the ugly, and the sinful. Evil provokes the passion of anger in proportion to its loathsomeness, and anger in turn elicits a definitive response to grave injustices and cruelties perpetrated upon innocent victims. Premeditated, malicious murder in all its forms — abortion, genocide, the bombing of civilian populations — rouses the natural reaction of anger to protest or combat these atrocities. In the Bible the violation of the Ten Commandments invariably incites God’s anger because the natural and divine laws enjoin justice to man and God, and disobedience destroys human relationships and harmony between God and man. The virtue of anger, then, expresses God’s love of justice and man’s innate sense of the knowledge of good and evil. In St. Basil’s words, “If your temper is not roused against the evil one, you will not be able to hate him as much as he deserves. For I hold that it is necessary to have equal zeal for the love of virtue and for the hatred of sin.”