Volume > Issue > The Root Causes of the Dislocation of Our Times 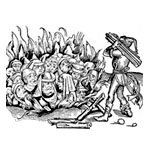 The Root Causes of the Dislocation of Our Times

By Richard Upsher Smith Jr. | June 2021
Richard Upsher Smith Jr., a Contributing Editor of the NOR, is retired from teaching classics and honors at Franciscan University of Steubenville. After serving for 19 years in the Anglican ministry, he converted to Catholicism in 2001. He is finishing an edition of Civil War letters, which he hopes to publish soon.

Imagine a dislocation in men’s lives so deep that common sense no longer makes sense. Now consider the fantastic positions, the fictions, held to be true by those on the Right and the Left in America today. Is there a correlation? Twentieth-century political theorist Hannah Arendt, were she still alive, would identify the former as the root cause of the latter. A current example of such fictions is the story former Republican president Donald Trump and his highly placed allies continue to spread — recently, for example, at the 2021 Conservative Political Action Conference, held this past February in Orlando, Florida — that the Democrats stole the 2020 presidential election from him. Since this past November, this story has been believed and propagated by Trump’s supporters from all walks of life and all regions of the country, to the point that thousands of them descended on Washington, D.C., on January 6, the date of the election’s certification by Congress, to “Stop the Steal.” They stormed the U.S. Capitol Building, and in the ensuing chaos, more than 140 people were injured and one woman fatally shot.

This violent episode is but one of many in recent years organized or inspired by either the Alternative Right (Alt-Right) or the Anti-Fascists (Antifa). These two loose associations of individuals and groups operate at opposite ends of the political spectrum, but they hold worldviews that are equally unreal and equally destructive.

The Alt-Right, which received its name in 2010 but has roots as deep as the Ku Klux Klan, has diminished as a public movement since the violent August 2017 “Unite the Right” rally in Charlottesville, Virginia, in which one person died and 19 were injured (five critically). But the Alt-Right retains influence through such organizations as the National Policy Institute in Atlanta, such online influences as QAnon, and such gangs as the Proud Boys.

The Alt-Right phenomenon has largely been spearheaded by a loosely associated group of anonymous Internet “trolls,” those who purposefully agitate and anger others in online forums. These trolls, who avoid political parties and institutions, are mostly male Caucasians, frequently college-educated, tech savvy, and often under- or unemployed. In a word, they are socially atomized, politically dispossessed, and rootless individuals. They believe in white supremacy and the separation of the races into different polities. They are anti-Semitic, believing in a Jewish world conspiracy. They are anti-immigration. Many are anti-feminist yet pro-choice. They despise the mainstream conservative movement associated with the Republican Party. They believe that contemporary society, culture, economics, and politics are organized against the white “race,” and they are convinced that not only their economic future, but the existence of their race and culture, is in jeopardy.

Antifa began in Minneapolis in 1987 among a multi-racial skinhead crew that was a subset of the post-punk music scene. This crew, influenced by European anti-fascists, whose history goes back to the interwar period, formed Anti-Racist Action (ARA), a decentralized network of militant far-left political cells. Largely anarchist in philosophy, these left-wing skinheads favored direct action: street fights with right-wing, neo-Nazi skinheads and breaking the windows of merchants who sold racist merchandise. ARA spread throughout North America in the 1990s and early 2000s and began to draw adherents from the counterculture beyond the post-punk scene. Quiescent for ten years, ARA’s influence revived in the Trump era, though under different names and with new tactics, particularly “doxxing,” the outing of anonymous Alt-Right trolls by publishing their private personal information online. Antifa adherents — still largely anarchists, though they’ve attracted some communists and socialists too — are “anti-authoritarian” and despise the mainstream liberal movement associated with the Democratic Party.

The Astros' systematic cheating vitiated the sanctity not only of the game of baseball but a core feature of American identity.