Volume > Issue > The Problem Is Not Too Many People 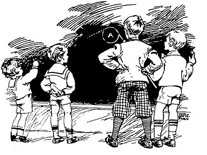 By Thomas Storck | June 1995
Thomas Storck is a librarian in Washington, D.C., and author of The Catholic Milieu

In most circles it is an article of unquestionable faith that the world has a population problem. This can mean either that there are now too many people in the world, or that if population growth is not halted now, there soon will be too many people. And there are organizations corresponding to both these viewpoints: Negative Population Growth, which believes there are too many people now, and Zero Population Growth, which simply wants to limit future growth. It is generally assumed by all right-thinking people that many or most of the ills of the world are due to “the population problem.” But there is reason to question this widespread assumption. Let me begin by looking at some examples of this conventional attitude.

Take, for example, an article in the Washington Post of October 9, 1994, entitled “Syria’s Economy Starting to Slow.” The writer has good things to say about the people of Syria. Quoting an unnamed diplomat, he writes: “The people are bright, they work very hard, and they’re basically technically competent.” Now, it would seem to me that a country could never go wrong in having a few more such bright, hardworking people. But not to the Washington Post‘s reporter. For in the preceding paragraph, he wrote: “Syria still suffers from a bloated and inefficient public sector, widespread corruption and, most ominously, rapid population growth, which threatens to overtake economic growth within a few years” (emphasis mine). Without necessarily agreeing that economic growth after the pattern of modern thinking is an unambiguous good, I nevertheless find this hard to understand. Would not one think that more bright and hardworking people would make for more economic growth? It is true that there will be a lag between the time the bright and hardworking people are born and the time they can begin to contribute to the gross domestic product, but in the meantime, they will consume a good many products and require the services of physicians, teachers, and others, whose work also contributes to economic growth. So in this way they will help the GDP to rise ever higher, even while at their mother’s breasts.

Another example of this pervasive thinking, or rather non-thinking, about population is the following. In a special survey of Islamic countries in The Economist (Aug. 8,1994), the writer states, “In Libya, Colonel Muammar Qaddafi is lucky to have a country with few people and plenty of oil….” Now, it is true that if you have few people, you will have more money from the sale of a given amount of oil to give to or spend on each person. But the notion that fewer people is necessarily better for economic growth is simply wrong and is based on neither facts nor logic. Let us examine a particular case.

In 1993 the population per square mile of Haiti was 600. In Barbados, another Caribbean island nation, it was 1,538. This is what a 1985 book Underdevelopment Is a State of Mind, has to say about Barbados and Haiti: