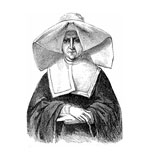 Dominican Sister Maria Jesus Galan was asked to leave her religious order and her home at Santo Domingo el Real convent in Toledo, Spain, where she has lived a cloistered life for the past thirty-five years. The reason: Sister spent too much time on Facebook. Living up to her nickname “Sister Internet,” the 54-year-old broke the news on her Facebook page, where she announced she had been asked to leave the convent following disagreements over her online activity. Sister Maria had almost six hundred “friends” on Facebook at the time of her eviction and listed her hobbies as “reading, music, art and making friends,” according to the Daily Telegraph (Feb. 19).

A Finland-based group calling itself the Food Liberation Army has claimed responsibility for “kidnapping” a statue of the McDonald’s food-chain mascot Ronald McDonald. The group posted a video on YouTube, in which balaclava-clad “terrorists,” holding the clown statue with a bag over its head, demanded that the world’s largest food chain answer questions about its corporate responsibility and food production. “We love burgers, fries, and McDonald’s, but we can no longer watch in silence as the food we love is being destroyed and brought to shame because of greed and indifference,” said one of the “terrorists,” speaking in Finnish. The man said the statue, which was taken from a Helsinki restaurant on January 31 by two men posing as maintenance personnel, would be “executed” if Mc­Donald’s executives failed to answer their questions, which include: “Why are you not open about the manufacturing processes, raw materials and additives used in your products? What are you afraid of?” (The Raw Story, Feb. 3).

Malaysian religious authorities arrested more than a hundred Muslim couples who defied a ban on activities marking Valentine’s Day. In 2005 Islamic authorities issued a fatwa to warn Muslims against celebrating this “lovers’ holiday,” which has links to Christianity, explaining that the occasion could lead to vice activities, especially premarital sex. The Selangor State Islamic Religious Department conducted the raid with the help of local police in budget hotels from midnight to 6 AM on February 14. The department said forty of the couples would be charged in sharia court with defying the ban. The rest agreed to be counseled. Iran and Saudi Arabia have also banned Valentine’s Day celebrations (The Straits Times, Feb. 15).

Inmates at Chinese prisons were given a chance to express their remorse — by washing the feet of the families they have shamed. Prisoners at Jialing jail in Sichuan province were allowed to invite their relatives to the prison for the ancient ceremony to mark Chinese New Year, reports Orange News (Feb. 2). The inmates wash the feet of their family members as an apology for the disgrace they have brought on their relatives. “It is an ancient tradition that we have revived as Family Love Week,” said a prison spokesman. “More than 150 prisoners washed more than 450 pairs of feet. It makes them think about their crime and the consequences. It is a very moving experience.” Not only that, but every visitor “can buy a souvenir photo.”