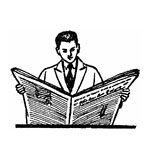 Every Good Friday in the Philippines dozens of men reenact the crucifixion of Jesus Christ by having themselves nailed to wooden crosses. This year Philippine health officials warned people taking part in these crucifixions to get a tetanus shot first and sterilize the nails to avoid infections. They also advised people taking part in the accompanying self-flagellation rituals to check the condition of the whip that will be used before having their backs lashed. The health officials claim to have evidence that both crucifixion and self-flagellation are health hazards (Agence France-Presse, March 20).

According to a new study published by an Israeli researcher, Moses was high on psychedelic drugs when he heard God deliver the Ten Commandments. Benny Shanon, a professor of cognitive psychology at the Hebrew University of Jerusalem, told Israeli public radio that the event “joined Moses and the people of Israel under the effect of narcotics.” That means, added Shanon, that Moses was probably also on drugs when he saw the “burning bush.” Shanon mentioned his own experience when he used ayahuasca, a powerful psychotropic plant, during a religious ceremony in Brazil’s Amazon rainforest in 1991. “I experienced visions that had spiritual-religious connotations,” Shanon said. He said the psychedelic effects of ayahuasca were comparable to those produced by concoctions based on bark of the acacia tree, which is frequently mentioned in the Bible (Agence France-Presse, March 4).

At least 50 people in India’s Kottayam district have lost their sight after staring at the sun hoping to see an image of the Virgin Mary (Daily Telegraph, March 18). Despite warnings, and the potentially harmful effects of their actions, believers are still flocking to a hotelier’s house in Erumeli near where the “divine” image is said to have appeared. “All our patients have similar history and symptoms,” explained Dr. Annamma James Isaac, the local hospital’s ophthalmologist. “They have developed photochemical burns after continuously gazing at the sun.” In other words, they have burned away their retinas, leaving them blind. The hotelier, who has since moved, had claimed that statues of the Virgin Mary in his house had been crying honey and bleeding oils and perfumes.

A sharia court in Malaysia jailed a woman for joining a “teapot worshiping” cult. Kamariah Ali was first arrested for apostasy in 2005 when the government of the Muslim-majority country demolished the two-story-high sacred teapot, worshiped by the “heretical” Sky Kingdom cult. In Malaysia, those born as Muslims, such as Mrs. Ali, are forbidden from converting to other religions or worshiping giant teapots or other idols. Passing sentence, sharia judge Mohammed Abdullah said, “The court is not convinced that the accused has repented and is willing to abandon any teachings contrary to Islam. I pray God will open the doors of your heart, Kamariah” (Daily Telegraph, March 16).