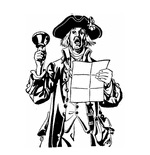 In an effort to be multicultural, the town of Milrow, England, put up its Christmas decorations — including a giant Noel sign, Santa Claus, and even a penguin on skis — in August, 127 days before Christmas. According to the town council, Milrow is adapting its decorations and light display for celebrations of several non-Christian faiths, starting with the Muslim festival of Eid on September 20. Other holy days include the Hindu festival of Diwali in October, the Jewish holiday of Hanukkah in December — and even the Wiccan festival Yule, celebrated by white witches and pagans on the winter solstice. Oddly, however, the town’s decorations are secular Christmas symbols (Ana­nova, Aug. 21).

Movie legend Marilyn Monroe still carries enough cachet that the crypt above hers sold on eBay for $4.6 million this August. Elsie Poncher, whose husband, Richard Poncher, is buried in the crypt above Monroe’s at Pierce Brothers Westwood Village Memorial Park in southern California, said she wanted to sell it to pay off the mortgage on her Beverly Hills home. Richard, a “serial entrepreneur,” according to Elsie, who built two bulletproof cars for Al Capone, died 23 years ago. Richard bought the crypt from Joe DiMaggio when the Yankee great was in the midst of his divorce from Monroe in 1954. Elsie said that when her husband was dying, he made a request: “If I croak, and you don’t put me upside down over Marilyn, I’ll haunt you the rest of my life.” Right after the funeral, Elsie said, she conveyed her husband’s wish to the funeral director. “I was standing right there, and he turned him over,” she said. Playboy’s Hugh Hefner bought the crypt next to Monroe’s in 1992 for $75,000 (Los Angeles Times, Aug. 24).

A Nebraska man who stole a painting of the Virgin Mary to finance an abortion for a 14-year-old girl he raped was convicted of first-degree sexual assault and felony theft. According to county prosecutor Brenda Beadle, Aurelio Vallerillo-Sanchez of Omaha fled to Mexico in March 2007 with the pregnant teen and the 300-year-old painting worth $100,000: “The plan was that when they got to Mexico, she was to undergo an abortion.” When an abortion wasn’t possible, Vallerillo-Sanchez pushed to have the baby given up for adoption. “He wanted to do everything he could to get rid of this baby because it was evidence against him,” said Beadle. The teen returned to Nebraska after giving birth in Mexico. Vallerillo-San­­chez’s son told police he served as a lookout as his father stole the painting from St. Cecilia Cathedral in Omaha. The thief sold the Virgin Mary painting for just $3,000 in Mexico, his daughter told police (Associated Press, Aug. 22).

Six Pennsylvania men from The American Society for the Defense of Tradition, Family and Property traveled to Warwick, R.I., this summer to urge people to support traditional marriage. Rhode Island is the only New England state that does not allow same-sex marriage. Standing in front of the Rhode Island Mall, the men hoisted a large banner stating their beliefs: “God’s Marriage = 1 man & 1 woman.” Another sign read: “Honk for Traditional Marriage.” Amanda L. Zangrilli, 23, said she and her girlfriend had seen the men in the same spot for a few days and, offended by their message, had “every intention” of bringing opposing signs of their own. Instead, the two drove to a friend’s house, gathered whatever they could get their hands on in the refrigerator, and returned with two lesbian friends to assault the demonstrators by pelting them with condiments. Their weapons in the attack: mayonnaise, ketchup, and salsa — in bottles. “I feel immature,” said one of the four women arrested in the assault. “We obviously shouldn’t have gone up to them at all, because none of this would have happened” (Providence Journal, July 31).