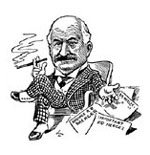 A Miami defense lawyer’s pants burst into flames as he began his closing arguments in front of a jury — in an arson case (Miami Herald, Mar. 8). Stephen Gutierrez, who was arguing that his client’s car spontaneously combusted, had been fiddling in his pocket as he was about to address jurors. When smoke began billowing out his right pocket, he rushed out of the courtroom, leaving spectators stunned. After jurors were ushered out, Gutierrez returned unharmed, with a singed pocket, and insisted it wasn’t a staged defense demonstration gone wrong. Instead, he blamed the flames on a faulty battery in an e-cigarette. Gutierrez was representing Claudy Charles, 48, who was accused of intentionally setting his car on fire in South Miami-Dade. Gutierrez had just started his closing arguments when the fire broke out. Jurors convicted Charles of second-degree arson.

A mom from Detroit and her son are “transitioning” together to dad and daughter (New York Post, Mar. 14). Corey Maison, 15, first told his parents four years ago that he identifies as a girl, but it was not until last year that he learned that his mother was also struggling with her identity. Erica Maison, who now goes by Eric, said she was emboldened by her son’s decision to transition to female and has since undergone a double mastectomy as part of the transition process to male. The mother of five plans to stay with her husband, Les, who supports her decision. “I fell in love with the person. She was beautiful as a woman, but equally beautiful on the inside,” Les said. “As long as Eric is happy with the appearance, Eric will be happy with what’s in her brain — or his brain.”

Students at Loyola University Chicago who “self identify as White” can apply to join a safe space to learn about white privilege, institutional racism, and internalized racism. Ramblers Analyzing Whiteness (R.A.W.) is a small, closed group for white students at the Jesuit school to “engage in dialogue about their own racial identity” and “critically reflect on…their actions.” Members of the group, who are chosen through an application process, participate in six two-hour sessions on safe spaces, white privilege, cycles of oppression, and bystander intervention. According to R.A.W.’s application guidelines, whiteness is “difficult to define,” and thus all students who “self identify as White” are eligible for admission. However, if students are unsure if they qualify as “White,” they can e-mail one of the R.A.W. guides to confirm (CampusReform.org, Mar. 27).

Why is it that gay and lesbian students enjoy special protection from harassment while religious students do not?

When Invoking "the Holy Spirit" Will Justify Just About Anything

The wealthy Anglican Churches promote a radical transformation of Christianity to make it over in a way agreeable to elite society.