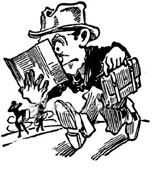 By Richard V. Pierard | May 1985
Richard V. Pierard is Professor of History at Indiana State University in Terre Haute and a Contributing Editor of The Reformed Journal. He is the author or co-author of numerous pioneering books and articles in the area of the relationship between evangelical Protestantism and right-wing politics, particularly in Germany and the U.S.

One day last year I was drinking hot choco­late with your Editor in a small café in Berkeley. As one might expect, we soon began swapping anecdotes about our experiences. This led him to suggest that I should share some of my pilgrimage with you.

At first I demurred, insisting that the Chris­tian world is already surfeited with first-person ac­counts by celebrities and spiritual leaders, and I certainly did not qualify on either count. I main­tained that it would be arrogant of me even to con­sider such an undertaking.

But your Editor convinced me that I should put my reservations aside and jot down a few re­marks. Besides, since I was passing the mid-century milestone in my life last year, I had to admit it was a natural occasion to pause and reflect on things that had touched my existence.

The details of my personal biography are of no great significance. I was born in Chicago of par­ents who had left smaller towns to find their for­tune in the big city. Neither had any college education. My paternal grandfather was an immigrant Belgian coal miner (hence my Walloon name) and my maternal grandfather a Presbyterian minister. During World War II my father, who was a clerk and eventually an office manager, took a job in Washington state at a top-secret defense plant known as Hanford Works. It turned out to be part of the atomic bomb program, the Manhattan Proj­ect, and Dad stayed on as a permanent employee until his untimely death in 1965. Growing up in the atomic city of Richland, I was literally a child of the nuclear age.

The proud and talented scholar threw herself gladly, ecstatically at His feet, He of the Cross, He whose Cross had become her cross.