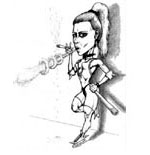 Protesters outnumbered fans at the opening of a bright pink, life-size Barbie house in Berlin. Demonstrators burned a Barbie doll on a cross at the opening of the Mattel toy company’s fictional Malibu Dreamhouse, protesting the “cliché of the female role in society” (NBCNews.com, May 17). Protesters wearing “Pink Stinks” T-shirts said they object to “marketing strategies that allocate a limited gender role to young girls.” For an entry price of $28, visitors can fully immerse themselves in the pink world of Barbie. They can check out Barbie’s walk-in wardrobes and even “try on” her outfits using a digital mirror. But “this dream world suggests that women can’t be anything less than beautiful and slim,” said Franziska Sedlak of the protest group Occupy Barbie Dreamhouse. “And life is not about being beautiful all the time.”

A North Carolina couple has traveled to Hawaii so that dolphins can assist with the birth of their first child. Adam and Heather Barrington told the Charlotte Observer (May 28) that a book called The Ancient Secret of the Flower of Life gave them the idea. The Barringtons plan to spend three months trying to bond with a dolphin pod, after which Heather will give birth surrounded by the mammals. “It’s total relaxation for the mother,” Adam told the Observer. Science writer Christie Wilcox, however, said, “This has to be, hands down, one of the worst natural birthing ideas anyone has ever had.” On her blog for Discover Magazine, Wilcox pointed out that, although dolphins are intelligent and frequently friendly toward humans, they have also been known to attack people without warning.

If your company offered you a 15 percent pay raise to tattoo its logo on your body, would you do it? A New York City real estate company has made the offer and, so far, 40 employees have gotten inked. Rapid Realty owner Anthony Lolli said he got the idea from a loyal employee who wasn’t doing it for money. “He calls me up, he says, ‘Hey Anthony, I’m getting the logo on me.’ I show up at the shop and I’m like, ‘This is cool, how can I repay you?'” The concept snowballed. Joseph Tighe has been on the job only a month but has already taken the plunge. “My wife was a little concerned but I said, you know what, it was the best commitment I could think of,” he told CBS New York (Apr. 30). The Rapid Realty tattoos, which can cost up to $300, are paid for by the company owner. Lolli, however, said he hasn’t gotten inked yet, but plans to eventually.

The parents of girls who attend Linden Avenue Middle School in Red Hook, New York, are outraged after learning of an anti-bullying workshop in which their 13- and 14-year-old daughters were told to ask one another for a kiss and two girls were told to stand in front of the class and pretend they were lesbians on a date (CBNNews.com, Apr. 29). Parent Mandy Coon told reporters that her daughter complained to her, saying, “Mom, we all get teased and picked on enough. Now I’m going to be called a lesbian because I had to ask another girl if I could kiss her.” Coon says parents were given no warning about the presentations, which focused on homosexuality and gender identity and introduced such words as pansexual and genderqueer, and there was no opportunity to opt out. Both the school principal and the district superintendent defended the workshops, claiming that they are required under the state’s Dignity for All Students Act, which prohibits harassment and bullying in the classroom.

The Bishop Has No Clothes... Six-Year-Old Man-Child... Saggy Pants Ban... Getting Lit Up... Boy Toys for Girly Girls... Building a More Genuine You... Snap Judgment... In Pasta They Trust... Zombie Christmas... Star Wars Christmas... Stressed Out by White Jesus... DaVinci's Landing Pad... Mystery Makeover... Your 2015 Word of the Year