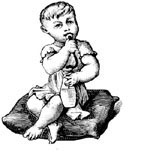 Sister Roxana Rodriguez, a 33-year-old nun from El Salvador, was rushed to the hospital in the Italian city of Rieti complaining of acute stomach pains. A few hours later she gave birth to a baby boy. She had been convinced that she was suffering from a gastric infection and thought the swelling in her abdomen was related to poor digestion. When doctors conducted an ultrasound and told her she was in an advanced stage of pregnancy, she screamed, “I can’t give birth, I am a nun!” The local bishop said she would have to leave the Little Disciples of Jesus convent near Rieti, where she lived and worked. Calling the baby a “gift from God,” Sr. Roxana named him Francis, “in honor,” she said, “of our South American pope.” The father of the child is believed to be in El Salvador (The Telegraph, Jan. 19).

An Israeli woman has appealed to the nation’s Supreme Court against a rabbinical ruling that ordered her to circumcise her one-year-old son. The rabbinical court that was presiding over the woman’s divorce case ruled in December that she must fulfill her husband’s wish in the matter, and it levied a fine of the equivalent of $142 a day until she does so. Rabbinical courts in Israel have jurisdiction over matters of marriage and divorce, and operate under the Justice Ministry. But in her appeal, the unnamed woman said the rabbis had no jurisdiction over her son’s circumcision, which she says is tantamount to physical abuse. “I don’t believe in religious coercion,” she told a local television news program, facing away from the camera so her identity was not revealed (Reuters, Dec. 18, 2013).

A former Anglican bishop blasted a new trial version of the Anglican Communion’s baptism service, which no longer calls for parents and godparents to repent of their sins. Michael Nazir-Ali, who resigned as bishop of Rochester, England, in 2009, said the move is part of a “constant dumbing down” of Christian teaching (Agence France-Presse, Jan. 4). “It is best to call a halt to this perhaps well-meant effort before it further reduces the fullness of the Church’s faith to easily-swallowed soundbites,” he said. The original version asks parents and godparents if they “reject the devil and all rebellion against God,” and if they “repent of the sins that separate us from God and neighbor.” No mention of the devil or sin is made in the trial version, which is backed by the Archbishop of Canterbury Justin Welby, leader of the world’s 80 million Anglicans.

According to the Italian news agency ANSA (Jan. 20), a former commander of the Swiss Guard gave an interview to a Swiss weekly in which he asserted that a “gay lobby” in the Vatican forms a sort of “secret society” and could pose a risk “to the security of the pope.” Elmar Mäder, who served as commander of the Guard from 2002 to 2008, said that homosexuals in the Vatican “tend to support each other, and that makes them more loyal to one another than to the institution.” He also said he had advised his men to steer clear of a few Vatican officials he considered especially “lascivious.” Pope Francis himself has been equivocal about the existence of a supposed “gay lobby.” Returning from Brazil on the papal plane last July, the Holy Father dismissed the idea with some papal snark, quipping that “I have yet to find on a Vatican identity card the word ‘gay.'” Around the same time, however, in a private session with leaders of Latin American religious orders, Francis reportedly said, “The ‘gay lobby’ is mentioned, and it is true, it is there…. We need to see what we can do.”