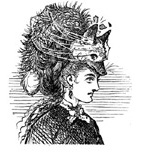 In what’s being called a first in the U.K., a British mother has helped her 24-year-old gay son become a father by carrying his child as a surrogate. Anne-Marie Casson, 46, became pregnant using a donor egg fertilized by her son Kyle’s sperm, reports London’s Telegraph (Mar. 7). A family court judge has ruled that the situation is “entirely lawful” and has allowed Kyle to adopt the baby — his son but also, legally, his brother. As for the child, if he “bonds with [his] primary carer, feels secure and loved, [he] will do well, no matter how unconventional [his] conception,” claims Fergus Greer, a family psychologist. “If Kyle and Anne Marie can create this loving home for Miles, he will be able to cope with the revelation of his unusual origin.”

Aides to Rep. Jeff Fortenberry were hit by a glitter bomb sent to his Lincoln, Nebraska, office (Omaha World-Herald Bureau, Mar. 6). A glitter bomb is a prank device designed to throw off a cloud of tiny sparkles that get into clothes, computer keyboards, and everywhere else. The Republican congressman, who was on Capitol Hill at the time, avoided being showered with the unwanted, sparkling decorations. The attack appears to have been motivated by Fortenberry’s anti-abortion positions, said spokeswoman Jennifer Allen. A note included with the glitter bomb read, “Congrats, you’ve earned this for trying to deny women their right to choice. Mind your own uterus.” Allen suggested that those who take issue with Fortenberry’s positions would be better off making an appointment. “You can certainly disagree with your member of Congress or any member of Congress, but this is pretty reckless and irresponsible,” she said.

A Naples, Italy, pizzeria owner jumped a barrier and approached the Popemobile to hand a pizza to the Pope during Francis’s visit there (United Press International, Mar. 23). The Pope, in a Vatican Radio interview, had said that “one thing that I would like is to go out, without anyone recognizing me, and go to a pizzeria to eat pizza.” Enzo Cacialli supplied the next best thing: delivery. He handed Francis a thin-crust pizza with Il Papa spelled out in dough sticks on top. The delivery didn’t seem to surprise the Pope’s security detail. “I gave him the pizza and with a smile he said, ‘Thank you,'” said Cacialli. “It’s really hard for me to express the value of this gesture for a man we really love and value, for a beautiful person full of humanity.” Cacialli said he hopes to hear whether Pope Francis enjoyed the pie.

Televangelist Creflo Dollar has been criticized for trying to raise $65 million to purchase a luxurious G650 jet for his ministry (Christian Post, Mar. 23). But Mr. Dollar is unabashed about following the “prosperity gospel”: Poverty, he says, is ungodly. “Poverty is not the will of God for any believer,” Dollar claims. “You and I don’t serve a God of lack and insufficiency. He is the God of the exceeding and the abundant. In fact, He wants to lavish you with His goodness.” Dollar has written that financial lack is a major source of problems for many people, and he feels it is his duty to tackle it as a spiritual problem. “God favors prosperity. According to Psalm 35:27 and 3 John 2, He is pleased when you prosper in your spirit, soul and body,” he says. Wikipedia sources report that Dollar’s real name is Michael Smith; Dollar calls this an “urban legend.”