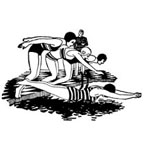 An Anglican church in Manchester, England, hosted a controversial play that portrays Jesus as a transsexual woman (The Christian Institute, Feb. 16). The Gospel According to Jesus, Queen of Heaven, written and performed by a transsexual writer — Jo Clifford, formerly known as John Clifford — formed part of the Queer Contact Festival and was described by organizers as a “humane, mischievous and loving show” that includes familiar parables “reimagined by a transgender Jesus.” Anglican bishop of Worcester John Inge was surprised that a church was hosting the “irreverent” play but said that responsibility for its performance “lies solely with the local minister.” Inge said he “cannot support this particular performance” and has “urged that consideration be given to transferring it to a less contentious venue.” But he added that his stance “in no way weakens the support I and my colleagues continue to give to the transgendered members of our community and our churches.”

The tiny Isle of Bute, Scotland, with a total population of under 7,000, is expected to take in around 1,000 Syrian refugees. Commenting online about the comparatively huge and sudden influx of Muslim immigrants has become risky business for residents. Police confirmed that they arrested a 41-year-old local man for a supposedly “offensive” comment he posted on Facebook regarding the migrants (Breitbart, Feb. 16). “I hope that the arrest of this individual sends a clear message that police in Scotland will not tolerate any form of activity which could incite hatred and provoke offensive comments on social media,” said Inspector Ewan Wilson. Such social-media crackdowns aren’t limited to Scotland. Dutch police have paid numerous visits to people who’ve posted anti-mass-migration comments, telling one man, “You tweet a lot. We have orders to ask you to watch your tone. Your tweets may seem seditious.” Danish police arrested a veteran politician for tweeting about Muslim anti-Semitism. And Facebook, Twitter, and Google have teamed up with German law enforcement to delete “hate speech” within 24 hours, in what has been seen as a last-ditch effort to silence public dissent.

Most believers will gladly pray for you, free of charge. But at the Christian Prayer Center, a Seattle-based “online church,” you can post prayer requests and receive prayers from thousands of Christians, as long as you have a credit card (KOMO News, Feb. 18). In order to get your message to the Almighty, you have to sign in and answer a prayer survey that leads to the digital collection plate. Prices start at $9. The Prayer Center’s website defends the practice, saying there’s little difference between a credit-card form on a website and an offering plate in a pew. But the Better Business Bureau has received complaints that the website charges users unexpected monthly fees, and people who feel they were unfairly charged have had difficulty getting hold of anyone, either by phone or e-mail. The Christian Prayer Center is the brainchild of Benjamin Rogovy, who made waves in 2005 by promoting a venture he called “Bumvertising” — paying panhandlers to advertise his game website on their cardboard signs.