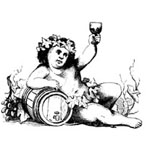 Iran’s ministry of culture has decided to censor the word wine (and the names of “certain foreign presidents” and “foreign animals and pets”) from all books published in the Islamic republic to counter what Ayatollah Ali Khamenei, the country’s Supreme Leader, called a “Western cultural invasion of Iran that seeks to destroy Islamic identity” (Telegraph, Jan. 19). Once an ancient and major producer of wine in the Middle East, Iran has banned alcohol since the Islamic revolution in 1979. But consumption is rumored to be widespread. One member of the Iranian parliament alleged that alcoholic drinks are smuggled in. “There is absolutely no control over the contents of the tanker trucks that supposedly import oil from Iraq into our country that are in fact loaded with wine and beer,” said Abuldreza Messri, the MP for Iran’s border city of Kermanshah.

Officials at a seaside town in Taiwan think they have come up with a new way to entice more women to go to church: They’ve built a house of worship made almost entirely of glass and shaped like a high-heel shoe (Daily Mail, Jan. 11). The huge structure, which measures 55 feet tall and 36 feet wide and is made out of 320 pieces of blue-tinted glass, sits near the waterfront at Ocean View Park in Budai town, on the east coast of Taiwan. The shiny blue church was designed specifically to appeal to female worshipers. Zheng Rongfeng, spokesman for the Southwest Coast National Scenic Area, said it will have a total of 100 female-oriented features, 71 of which have been finished. They include chairs for “lovers,” maple leaves, biscuits, and cakes — all ideal for romantic photographs. Although it caters to female worshipers, it is unclear what denominational affiliation the church will have.

Updating a story from an earlier issue (“Monkey-Shoot Suit” Nov. 2015): A U.S. district judge in San Francisco has ruled that Naruto the macaque cannot own the copyright to photographs he allegedly took of himself because he is not human (Reuters, Jan. 7). Animal-rights group People for the Ethical Treatment of Animals argued that Naruto should be declared the owner of the photos and receive damages for copyright infringement, the proceeds of which would be used for habitat preservation on the monkey’s home island of Sulawesi in Indonesia. While the U.S. Congress and the president have the power to extend legal protections to animals as well as humans, “there is no indication that they did so in the Copyright Act,” Judge William Orrick said. The camera-owner’s lawyer expressed confidence in his client’s case: “It’s not a complicated situation. All that really matters is that the plaintiff is a monkey.”