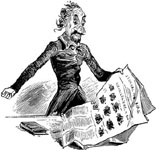 READ ALL ABOUT IT!

A May 8 report in The New York Times reasserts the timeworn canard that the Catholic Church — the Pope and the Vatican, in particular — is responsible for the AIDS crisis in Africa. “Let’s hope that Pope Benedict XVI quickly realizes that the worst sex scandal in the Catholic Church doesn’t involve predatory priests,” writes columnist Nicholas D. Kristof. “Rather, it involves the Vatican’s hostility to condoms, which is creating more AIDS orphans every day.” Kristof found a Catholic priest in Sao Paulo, Brazil, who has the solution: “If I were pope, I would start a condom factory right in the Vatican.” Yes, he’s serious. In fact, in his office, Kristof reports, that priest keeps a framed condom behind glass, with a sign: “In case of emergency, break the glass.”

A newly founded group of anti-TV crusaders plans to liberate people from the irresistible grip of the blue box. According to London’s Guardian (April 25), the White Dot group, named after the light circle that appears on a TV screen just before it goes blank, will be using a new gizmo called TV-B-Gone: “The glorified remote control, about the size of a key ring, will switch off most television sets within a 45-foot radius.” The boob-tube protestors are targeting restaurants, pubs, bars, and other public places, where they believe the background hum of television has replaced the art of conversation.