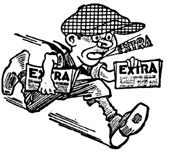 As part of a remodeling project for London’s Brixton Jail, new restroom facilities are being positioned so that Muslims do not have to face Mecca while sitting on the toilet. “The refurbishment has been carried out with due consideration for all faiths,” a prison spokeswoman explained (BBC News, April 21).

According to Deutsche Presse-Agentur (April 27), the governing Socialists in Spain are now campaigning for human rights for apes. Environment Minister Cristina Narbona explained that the proposed law would prohibit the “enslaving” of gorillas, chimpanzees, orangutans, and bonobos. Narbona did not explain how common ape slavery has become throughout the Iberian nation.

The falling birth rate in Japan is a serious problem for the country’s toy industry. With fewer and fewer children, Japanese toy makers are targeting a new consumer group: lonely elderly women who have no children or no grandchildren. Tomy, which gave the world the children’s robot toy Transformers, is now marketing a talking robot doll that tells its owner how much it loves her when she returns home. “Many elderly people buy these dolls,” says Tomy’s Yuko Hirakawa, and “think the dolls are actual grandsons and granddaughters” (BBC News, April 30).