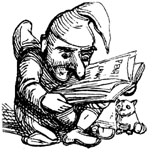 A bill pending in the California legislature, if it becomes law, would remove all references to gender in public schools. According to the Capitol Resource Institute (CRI), the legislation sponsored by lesbian actress Sen. Sheila Kuehl, “could potentially require gender-neutral bathrooms in our schools and all references to ‘husband’ and ‘wife’ or ‘mom’ and ‘dad’ removed from school textbooks as the norm.” Another California bill, which has already passed in the state Assembly and is expected to be approved in the state Senate, gives the California State Superintendent of Public Instruction the power to withhold state funds from school districts that do not promote transsexuality, bisexuality, and homosexuality.

According to an official government announcement, Spain will be issuing new birth certificates in which “the expression ‘father’ will be replaced with ‘Progenitor A,’ and ‘mother’ will be replaced with ‘Progenitor B.'” Pilar Blanco-Morales, the head of the national Civil Register, told the Spanish newspaper ABC that change was necessary to avoid discrimination against same-sex couples after the Socialist government approved “gay marriage” in 2005 (Daily Telegraph, Mar. 7).

Robert Holloway quit his job as Principal of St. Anthony of Padua Catholic School in Lorain, Ohio, after admitting that he kissed the feet of three teenage students to make good on a sports bet. Holloway told police he also agreed to pay each 14-year-old student $15 if educators lost a teacher-student volleyball game. One foot-kissing incident occurred in the school library. The other two took place in the gymnasium. Police said no criminal charges would be filed (Youngstown Beacon-Journal, Mar. 7).

An English prep school banned traditional hot cross buns during the Lenten season this year for fear the religious symbol drawn on top of each roll might offend some students. Tina Jackson, head teacher of the Oaks Primary School in Ipswich, asked her hot buns supplier to nix the crosses, according to the Suffolk Evening Star (Feb. 6). “The cross is there in recognition of the crucifixion and resurrection of Christ,” Jackson said, “but for our students who are Jehovah Witnesses, hot cross buns are not part of their beliefs.”