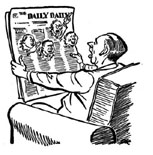 A man who pleaded guilty to molesting two teenage girls told a judge he did it because of his wife’s excessive bingo playing. “My wife was never home,” Floyd Kinney Jr. said during his plea hearing in Easton, Penn. “She would be going to bingo three, four times a week. I told her to stop going to bingo, and she said, ‘If they had bingo every day, I’d go every day.'” Kinney’s explanation did not sit well with Northampton County Judge F.P. Kimberly McFadden. “Some people, when their wives are not home, decide to do other things…,” McFadden said. “Your behavior is beyond the pale” (Baltimore Sun, Dec. 3).

In an interview with The New York Times Magazine (Nov. 19), Bishop Katharine Jefferts Schori, the first woman to head the Episcopal Church in the U.S., revealed that her Church is not interested in replenishing its rapidly diminishing ranks by encouraging its members to have children. Jefferts Schori, a former marine biologist whose expertise was “working with octopus and squids,” explained that “Episcopalians tend to be better-educated and tend to reproduce at lower rates than some other denominations. Roman Catholics and Mormons both have theological reasons for producing lots of children.” In fact, the bishopette says she discourages Episcopalians from having children.

Fr. Raymond Gravel, a 53-year-old Canadian Catholic parish priest, coasted to an easy victory in a parliamentary election in Repentigny, just east of Montréal, Québec. He received 66.3 percent of the vote, with his closest rival finishing a distant second with 18.7 percent. Although Fr. Gravel is a newcomer to electoral politics, he is well known for challenging both the Québec Church hierarchy and Catholic doctrine; he is on record supporting same-sex “marriage” and abortion. Before becoming a priest, Fr. Gravel worked as a homosexual prostitute for many years but opted for a career change after being brutally beaten by one of his clients (Ottawa Citizen, Nov. 28).

Italian movie legend Franco Zeffirelli has revealed in an autobiography that he first became aware of his “homosexual orientation” when he became the object of a priest’s affection while attending Catholic school in Florence. The 83-year-old director of Jesus of Nazareth explained: “Sexual abuse is putting it too strongly…. I felt sorry for the poor man. If I had realized what he had in mind, I would probably have given him what he wanted. I thought the priest felt a special affection for me; he was always kissing me.” Homosexual experiences, he says, “are not always bad for boys” (The Guardian, Nov. 21).