Volume > Issue > The Legion of Christ 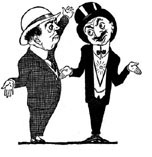 The Legion of Christ

HOPE FOR THE CHURCH?

In the unsettled atmosphere of a Church rocked to the core by clerical sexual abuse scandals, and facing a dearth of priestly vocations, Catholics anxiously cast about for signs of hope. One of those signs has been the Legion of Christ. Spurred on by Pope John Paul II’s approval of Fr. Marcial Maciel, the Legion’s founder, the Rome-based religious order has made inroads in U.S. Catholic circles. Founded in Mexico in 1941 by Maciel when he was a seminarian, the Legion now claims 500 priests, another 2,500 seminarians, 11 universities, and over 150 prep schools worldwide. Legionary priests serve in the U.S., operating a seminary and novitiate in Connecticut. The lay movement associated with the Legion is called Regnum Christi.

But today the luster surrounding the Legion is tarnishing. There are bitter skirmishes between Legionaries and laity over schools. Three U.S. dioceses have forbidden the Legion to operate within their environs: the Dioceses of Minneapolis-St. Paul, Columbus (Ohio), and Baton Rouge. The Legion and Regnum Christi are coming under fire from former members, who accuse the order of manipulation, mind-control, deceptive tactics, and cult-like practices. Former Legionaries and Regnum Christi members have formed a network called ReGain. Through ReGain’s website, which features news articles and personal testimonies, members say they seek to inform the public of the nature of the Legion’s policies and practices as well as provide healing for those psychologically damaged by the order. The most explosive situation for the Legion of Christ, however, involves the charges made by a number of former Legionary priests that Fr. Maciel sexually abused them for years, beginning when they were children in the Legion’s minor seminaries.

In the U.S., the Legion has led an almost subterranean existence in Connecticut since the mid-1960s. Very little was known about the order until the early 1990s, when a Hartford Courant journalist, Gerald Renner, attempted to interview Fr. Anthony Bannon, the Legion’s National Director, for a story on the Legionary seminary. Bannon’s unexpected refusal to talk piqued Renner’s interest, and he began to look more closely at the order. When Renner wrote an article about the Legion in a March 25, 1996, issue of the Courant, he began receiving phone calls about the secretive seminary in Connecticut. After meeting with several former seminarians, all of whom complained of being ensnared in a closed system and subjected to fierce control and brainwashing, Renner wrote more extensively about the Legion’s practices.

In 2002, when the Boston Globe blew the lid off the policy of sexual abuse cover-ups by many Catholic bishops nationwide, hundreds of victims came forward with charges of sexual abuse by clerics. The majority involved homosexual priests assaulting teenage boys. Similar cases appeared in Ireland, Canada, and Australia, where an identical policy of hierarchical cover-up and ongoing transfer of offending clerics also prevailed. In Italy, however, few if any such reports came to light. Journalists claim that non-English-speaking countries, such as Mexico, Spain, and Italy — where the Legion is based — operate under different legal codes, making facts about abuse cases difficult to obtain.

The charges against Fr. Maciel involve nine men (one now dead), all former Legionaries. For some, the alleged abuse began when they were barely 12 years of age, and continued until the men were in their mid-20s. Much of the abuse took place in Mexico, Spain, and Italy. Two of the men, Mexican Fr. Juan Vaca and Spanish Fr. Félix Alarcón, served the Legion in America. Fr. Alarcón opened the Legion of Christ center in Connecticut in 1965 and Fr. Vaca served for five years as the U.S. Legion Director before leaving the order. Three of the nine filed a canonical suit against Maciel and have been waiting years for it to be heard. (The Legion, of course, denies all charges against Maciel. See legionaryfacts.org.)

Just after this past Thanksgiving, the Pope publicly honored Fr. Maciel at ceremonies in Rome. But in the first week of January 2005, it was reported that Msgr. Charles J. Scicluna, a canon lawyer working as Promoter of Justice for the Vatican’s Congregation for the Defense of the Faith, stated that the long-standing case of former Legionaries, who have accused Fr. Maciel of molesting them when they were in the Legion’s minor seminary, could be reopened. Few Catholics know that the National Catholic Register, a weekly newspaper, is owned by the Legion. To date, the Register has refused to report on the Holy See’s new investigation of Maciel.

Can the Pope Save the Legion of Christ?

The Legion has long been accused of obfuscating the truth about its methods and finances, and the life of its late leader.

A Layman Advises Laymen to Hide Under the Table

The Legion of Christ claims the Vatican has dropped its investigation of its founder - but is it true?