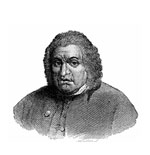 The Christian Philosophy of Samuel Johnson

NEITHER UTOPIAN NOR CYNICAL

By Matthew Anger | September 2009
Matthew Anger lives with wife and children in Richmond, Virginia. He is the author of Belief and Understanding, a collection of Catholic essays, and editor of The Eyewitness, an anthology of Hilaire Belloc's short stories.

As we celebrate the tercentenary of Samuel Johnson’s birth on September 18, 1709, the accomplishment the great British writer will likely be remembered for most is his Dictionary of the English Language (1755), a landmark piece of lexicography. Yet Johnson’s greatest accomplishment might be his philosophical novel The History of Rasselas, Prince of Abissinia (1759). Built along the lines of the Eastern tales fashionable at the time, the story, whose original working title was “The Choice of Life,” opens with Rasselas, the Ethiopian heir to the throne, confined to a fortified palace in “Happy Valley.” Despite access to every temporal pleasure and convenience, Rasselas is discontented. He plots his escape to the outside world with the help of his guide and mentor, Imlac, hoping to find true contentment in some new way of life.

As it turns out, the setting of Happy Valley is itself a good-natured jab at the persistent utopian desire to return to Eden. Unlike Voltaire, who places happiness in the worldly paradise of “El Dorado” in Candide, Johnson was aware that “infelicity is involved in corporeal nature, and interwoven with our being” (Rambler, No. 32). Of the many characters in Rasselas who struggle with the dilemma of infelicity is the astronomer, who appears near the end of the tale. The astronomer tries to find meaning in the pursuit of science, but succumbs to intellectual monomania and the mad belief that he actually controls the movements of the heavenly bodies. Fortunately, Imlac’s gentle advice delivers the scientist from his folly:

Disorders of the intellect happen much more often than superficial observers will easily believe…. There is no man whose imagination does not sometimes predominate over his reason…. No man will be found in whose mind airy notions do not sometimes tyrannize and force him to hope or fear beyond the limits of sober probability.

In the end, the characters admit the limits of purely human aspirations. Johnson’s lesson is that no pursuit will spare us from feelings of vexation and discontent. Thinkers from Epictetus to Thomas à Kempis cautioned men that true happiness is not dependent on outward circumstances alone, but on what they make of those circumstances in their pilgrimage through life. To some extent, of course, every person must discover the opportunities and limitations of life for himself. Johnson merely tried to soften the blow, so that we might temper disappointment with a realism based on a firmer hope than the fantasizing or vanity of youth.

Other Christian writers have dealt with this same subject. In Dostoyevsky’s Brothers Karamazov, Ivan says to his younger brother Alyosha, “We in our green youth have to settle the eternal questions first of all. That’s what we care about.” By contrast, “the older generation is all taken up with practical questions.” The liberal novelist Turgenev, a contemporary of Dostoyevsky, commented in his memoirs that intellectual enthusiasm is natural to youth. He said further that “it can hardly be denied that the aspirations of youth are always unselfish and honest.” Whether these aspirations are always really altruistic is open to debate. Dostoyevsky certainly saw the pitfalls. As for Johnson, he thought it “very natural for young men to be vehement, acrimonious and severe. For, as they seldom comprehend at once all the consequences of a position, or perceive the difficulties” that restrain cooler minds, they form hasty conclusions and expect others to share their views. Those who do not are deemed ignorant or corrupt (Rambler, No. 121).

No doubt young people can be pardoned for their naïveté. They may not be capable of distinguishing between idealism, self-interest, and stupidity; nevertheless, over time we do expect the hard bumps of reality to produce greater caution. It often happens that the more outrageous one’s initial hopes, the greater one’s final disappointment and inclination to despair. Cynicism, a vice that tempts the faithful as much as unbelievers, is not the answer. Johnson warns that it is also an “enemy to virtue” (Rambler, No. 79).

Kerouac said, “I am not ashamed to wear the crucifix of my Lord. It is because I am Beat, that is, I believe in beatitude and that God so loved the world that he gave his own begotten son to it.”