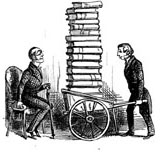 The Blessings of Downward Mobility

CAN WE RECOVER THE LOST AMERICAN DREAM

A few months before his death in February 1994, the eminent historian Christopher Lasch gave a talk at Harvard University about the American Dream. He showed how, in our century, this ideal has been corrupted and reduced to the rags-to-riches myth: in other words, upward mobility. In the 19th century, argued Lasch, what came to be known as the American Dream emphasized thrift, hard work, and self-sufficiency. The goal was not to get rich; it was to live modestly but well from honest personal labor. This, he suggested, would be a far better ideal for our own times.

My recent experience suggests that the opposite of the corrupted American Dream — downward mobility — can be healthy. For all the whining of professionals and executives suddenly out of work and forced to give up their expensive cars and suburban houses, economic woes can have a salutary, sobering effect. Downward mobility forces us to reconsider our acquisitive mentality. While not virtuous in itself, it can help us focus on the virtues of work and thrift rather than on their monetary rewards. It can thus lead us back to Lasch’s lost ideal.

Coming from a member of the elite, this would sound naïve; coming from one of the poor it might seem disingenuous. Being neither, I think I can speak with some credibility.

As the son of European refugees and growing up amid the exceptional economic growth of the 1950s and 1960s, I took upward mobility for the norm. I also learned, however, that to stay in the middle class I would have to study hard, plan realistically, and sacrifice some of my more fanciful inclinations. I dreamed of becoming a writer; I became a lawyer out of pragmatism and a scholar out of curiosity. But in the 1990s, California’s perennial prosperity wilted; lawyers were as common as fleas, and there were more than enough Ph.D.s to drive the taxicabs. I got a modest editorial job in equally depressed Massachusetts. My immigrant wife experienced a different kind of downward mobility: A professional in her own country, she found part-time sales work so we could make ends meet. Meanwhile, my law-school classmates were making partner, judge, or vice-president and in some cases earning three or four times my salary. It was an exercise in resisting envy and self-pity.

For a per­son with a strong social conscience, chastity is a ma­ture response to a great evil. It is a form of rebellion.

The Vatican Looks at Non-Marxist Socialism

In its universal concern, the Church cannot be a mouthpiece for the West, even if, as a result, the Pope is accused of “misunderstanding the free-market economy.”