Volume > Issue > The Age of Thoth: Words vs. The Word 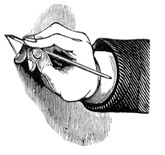 The Age of Thoth: Words vs. The Word

By Jason M. Morgan | March 2022
Jason M. Morgan, a Contributing Editor of the NOR, teaches history, language, and philosophy at Reitaku University in Kashiwa, Japan. He is the author, most recently, of Law and Society in Imperial Japan: Suehiro Izutarō and the Search for Equity (Cambria Press, 2020).

Thoth was the ancient Egyptian god of, among other things, writing. You might have seen a picture of him in a history book: the body of a man with the head of an ibis, one of Egypt’s most sacred birds. Thoth is often depicted holding a stylus, indicating his mastery of the written word.

French theorist Jacques Derrida saw much import in Thoth’s scribal attribute, which he linked to Thoth’s theogony as the son of Ammon-Ra. Derrida describes Ra, the sun god, and Thoth, the god-born scribe, in his book Dissemination (1972):

Thoth is an engendered god. He often calls himself the son of the god-king, the sun-god, Ammon-Ra…. Ra (the sun) is god the creator, and he engenders through the mediation of the word. His other name, the one by which he is in fact designated in the Phaedrus, is Ammon. The accepted sense of this proper name: the hidden. Once again we encounter here a hidden sun, the father of all things, letting himself be represented by speech.

The Phaedrus is one of Plato’s central works, a classic dialectic in which Socrates, Plato’s teacher and favorite literary character, recounts a story about Thoth. The gist of the story is that Thoth went on a sales call. He wanted the great god Ra to accept and “disseminate” among all the Egyptians a new art, one Thoth said would “make the Egyptians wiser” and “improve their memory.” The new art on offer is Thoth’s great innovation: writing.

Ra — embodied in the Phaedrus as Thamus, king of Egypt — is not buying it. Instead, according to Socrates’s retelling, he chides Thoth:

You provide your students with the appearance of wisdom, not with its reality. Your invention will en­able them to hear many things without being properly taught, and they will imagine that they have come to know much while for the most part they will know nothing. And they will be difficult to get along with, since they will merely appear to be wise instead of really being so.

Socrates, who apparently never wrote anything of his own, argues that writing introduces a kind of false authority, leading men to think that because something is written down it must be true. People forget to ask themselves whether what is written makes any sense, all the while assuming that, because they have read much, they know much.

"Novitiate" is a film to be expected at the bitter, burnt-out end of the sexual revolution. It is not so much a movie as a cry for help.

The sexbot is a tool that uses us and mocks our weakness. It is a vision of Hell: inhuman, ruthless, mendacious, comfortless, and cold.