Volume > Issue > By the Lakes of Babylon 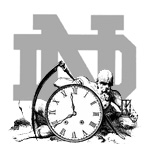 About a year ago, I was standing in line at a tiny post office in rural America when I saw something quite extraordinary. No, not a motivated postal employee. A Theodore Hesburgh stamp.

Theodore who? Those who are not regular readers of the Catholic press may be forgiven for not recognizing Hesburgh’s name. Even NOR readers may puzzle over why Hesburgh warranted his own place in the adhesive pantheon — called to the counters, as it were, as one of the “secular saints” (to borrow Pieter Vree’s phrase from a memorable New Oxford Note) who lend the Washington Leviathan moral legitimacy while conveniently eschewing any form of religious particularity. Think Abraham Lincoln. Or Franklin D. Roosevelt. Or Steve Jobs (Vree’s subject in “Saints for a Secular Nation,” Jan.-Feb. 2012). These and many more men and women are endued with a kind of civic-religion holiness, even though hardly any of us could pinpoint their religious affiliation.

Although Theodore Hesburgh, C.S.C. (1917-2015), has faded into the mists of history, half a century ago his was a household name. Catholics will probably remember him best for “The Land O’ Lakes Statement: The Nature of the Contemporary Catholic University” (1967), a document published during the halcyon years of Fr. Hesburgh’s three-decade-plus tenure as president of the University of Notre Dame. The “Land O’ Lakes Statement” affirmed that Catholic universities should be free from religious oversight, thus effectively handing over the 800-year tradition of Catholic higher learning to the secularists who had taken over virtually every other aspect of American life. The “Land O’ Lakes Statement” was thus a kind of Summa of Catholicism in the 1960s — i.e., surrender to the world (the flesh and the Devil would come later) and capitulation to the Spirit of the Age.

To be sure, Fr. Hesburgh’s project to turn Notre Dame into a Big Ten school with Catholic characteristics enjoyed wild success. From the early 1950s to the late 1980s, Fr. Hesburgh increased Notre Dame’s endowment nearly 40-fold and its annual budget by some 1,800 percent. He transferred control of the university from his own religious order, the Congregation of the Holy Cross, to a secular board of directors, and he set Notre Dame — and countless other Catholic institutions that followed suit — on a course to acceptance by a culture that was becoming increasingly hostile to all forms of religious practice.

Big Brother North of the Border

Canada is writing laws based on gender defined as a sense, an experience, and the result of expression: dress, hair, make-up, body language, voice, name, and personal pronoun use.