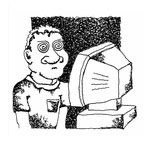 Taming the TV Habit: How Television Menaces Your Mind, Marriage, and Family

Wightman Weese is a book editor at Tyndale House Publishers in Illinois.

The author admits that more than 6,000 books have already been written about television, “most of them critical.” We should be glad that Kevin Perrotta didn’t allow all the others to deter him from writing this one, for it is well worth the reading.

If you are looking for a content analysis of American television programming, you won’t find it here. The author has chosen, rather, to help the reader understand what television as an informa­tion and entertainment medium is doing to view­ers, or, more correctly, what television is causing the viewer to do or not do.

Tube watching is compared to the effects of water on a sponge. Once a sponge is dipped in wa­ter it appears to be the same size and shape. The major change that has occurred is that the water content of the sponge has displaced an equal vol­ume of air. The author suggests that we should be­gin considering the effects of the medium by trying to discover what activities television watching is replacing in our lives. In other words, what would we otherwise do with the three hours per day that we average in front of the tube?

The material in the book is well documented, furnishing the readers with an estimable bibliogra­phy on the subject of television viewing habits. The book states the author’s case without flying in the face of what current secular theorists have demon­strated through research. Perrotta, in fact, says very little that anyone could reasonably contra­dict.

Some readers might judge that the book’s most telling indictment of television viewing is what has been demonstrated to happen in the mind of a typical TV viewer. Recently, psychological studies on the brain’s activity during sleep and var­ious states of consciousness have revealed certain brain wave patterns, now discussed in terms of wave lengths. Alpha waves, for instance, occur when a person is daydreaming, during which time the brain is usually not actively processing infor­mation from the outside world, according to re­searcher Erik Peter, who works in the field of electroencephalographic testing at San Francisco State University. These alpha waves usually disappear when the person is distracted, when his attention is redirected, or when he focuses his eyes together on a particular object.

Something interesting happens when a person is intently watching a television program. The brain at that time starts showing alpha waves, indicating that the brain, though it is receiving outside stimu­lus, is arriving at a passive, uncritical daydreaming mode. In such a state, the viewer can’t “be won ov­er by argument and brought to radical change. But [he is] learning, all the same, storing up images.” Peter says, “information goes in, but we don’t re­act immediately to it. It goes into our memory pool, and perhaps we react to it later but don’t know what we are reacting to.” In other words, the subliminal effects of what is being viewed should be a matter of concern to us.

The author admits, as do other mass commun­ication researchers, that it is difficult to produce direct cause-and-effect evidence to show that heavy television viewing is responsible for the decreasing reading ability of students, as indicated by recent Scholastic Achievement Test scores. But the strong correlation is there, and parents and teachers alike are noting that “discipline, concentration, logical reasoning abilities, and other intellectual skills are waning.”

Some of the author’s conclusions could have been explained by Marshall McLuhan’s theory of “hot and cool” media. The “cooler” the medium, according to McLuhan, the more the imagination and reason have to be exercised to make the mes­sage understandable. Television, being a “hot” me­dium, does all the thinking, the imagining. It fills in all the blanks, does all the creative thinking for us.

If it is really true that those who watch a lot of television are not demonstrating the same read­ing and reasoning skills as students did before the age of heavy television viewing, McLuhan’s theory could explain why heavy TV watchers are weak in such skills as reading, reasoning, and concentrating.

The author saves what I consider his most damaging thrusts for the last parts of the book. Television’s worst effect on us is what it does to create for us an unrealistic worldview. Because of TV’s input into our minds, the viewer tends to start acting on the subliminal, latent messages of today’s programming, such as the message that (1) human relations fail when people are not being “honest with one another” (whatever that means); (2) new attitudes toward morality, sex, homosexu­ality, etc., are to be welcomed as “mature”; (3) sex underlies everything; and (4) the best people are young, affluent, and beautiful.

At bottom, current television programming teaches us, patently and latently, that “the world is the world is the world,” that this is all there is, and it is of no importance whether God made all these things or not. Creative man, not Creator God, fills the screen. In other words, TV is an effective teacher of a worldview diametrically opposed to the Christian worldview.

Perrotta rightly calls TV a “habit,” which has harmful effects which Christians must find a way to eliminate. Christians must either find correct uses for TV or find a replacement for it.

For Christians who read this book, prime time will probably never be quite the same again.

TV is an effective teacher of a worldview diametrically opposed to the Christian worldview.

In the "Culture of Clinton": A Time for Defiance