Volume > Issue > Sin Is Good For the Economy 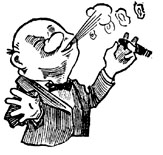 Sin Is Good For the Economy

More certain than even death and taxes is that this year the heavyweight politicians in both parties will tune up their rhetoric machines to focus on the issues that should dominate Campaign ’96. At first the major contenders might, like Dan Quayle in 1992, flirt with “family values,” maybe even “moral values.” But, as before, these will soon be perceived as no-win issues by the leading candidates, once they are forced to take hard and fast stands on sexual permissiveness, “lifestyles,” abortion, “death with dignity,” and the like. Too much polarization over “subjective” issues will not be tolerated.

What then? Why, make the pocketbook the issue. There’s nothing subjective about arithmetic. Taxes concern just about everybody, and so you must utter all the pieties about cutting fat from the bloated government budget, even while favoring increases in all kinds of necessary government programs. But wages are even more interesting to most people. More and better jobs will mean real increases in payroll stubs and bank accounts. The strategy, then, is simple: Concentrate on jobs. If you are President, stress how many jobs were created during your tenure. If you’re aspiring to be President, show how your programs will stimulate the economy and make jobs abundant.

As for the “social issues,” most of them somehow rooted in sex, you as an intelligent politician will suggest “putting them on the back burner” while we all tackle the “really important and urgent issue” of jobs. Or you will assume that the social issues will take care of themselves once we are all employed — and housed and fed and educated.

But there’s something unnoticed about this emphasis on indicators of employment and Gross Domestic Product, something surreal and bizarre. To grasp it, we must distinguish real economic growth, which enables us to enjoy more and better goods in exchange for work expended, from malignant growth, which forces us to expend work just to get back to a given status quo — to remedy something that need not have gone wrong in the first place. In this case, all the jobs created and all the goods produced have zero results for “the good life.” Economic activity results simply in getting back to square one. Had “the bad thing” not happened, there would have been no need for labor and treasure expended. We would have leisure. Or, if we did opt to work, we could produce some new positive good.

A Just Society: It Cannot Be Drawn on a Balance Sheet

No matter what the Dow-Jones average is doing, “opportunities for work” must be “provided for those who are willing and able to work,” as Pius said.