Volume > Issue > What Does It Mean to 'Serve Mammon'? 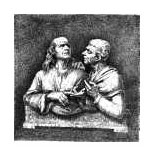 What Does It Mean to ‘Serve Mammon’?

A HEART PIERCED WITH MANY PANGS

By Christopher Zehnder | October 2012
Christopher Zehnder is the general editor of the Catholic Schools Textbook Project, which has published his books From Sea to Shining Sea, a history of the U.S. for grades 5-8, and Light to the Nations II: The Making of the Modern World, for grades 8-10. He lives with his wife and seven children in the mountains of central California.

“You cannot serve God and mammon.” These have been among the most repeated of the words of Christ and, perhaps, the most ignored. This might be because they are among the most misunderstood. What does it mean to serve mammon or wealth? Does the simple possession of wealth or the pursuit of money and material goods equate to the service of mammon? In seeking to better our material condition, do we imperil our eternal souls?

An honest misunderstanding of these words of Christ’s, however, is not alone the cause of their neglect. Some who hear them despise them. The Gospel of Luke tells us that the Pharisees, “who were lovers of money,” scoffed at these words of Jesus (Lk. 16:14). Why did they scoff? Because, Jesus said, they sought to justify themselves “before men,” not before God. Nevertheless, “God knows your hearts,” He told them; and He gave them this warning: “What is exalted among men is an abomination in the sight of God.”

As if to emphasize the truth that human exaltation is an abomination to God, Jesus almost immediately launches into one of His most well-known parables, that of the rich man and Lazarus (Lk. 16:19-31). Understood in light of the teaching of “Moses and the prophets” (v. 29) and, for us, the New Testament and sacred Tradition, this parable not only illustrates the perils of human pride but provides the key to understanding what it means to serve mammon, and how this service is not consonant with a life lived in God.

Our Lord delivers His parable with a simple but eloquent artistry. By the use of a few well-chosen, parallel but contrasting phrases, He paints for us a vivid picture of the rich man, or Dives, as tradition names him, and the poor beggar, Lazarus. Dives is “clothed in purple and fine linen,” while Lazarus is “full of sores.” The rich man “feasted sumptuously every day,” but the poor man had to content himself with nothing, for he “desired to be fed with what fell from the rich man’s table,” but was not. We can presume that Dives, being rich, had servants to wait on him; Lazarus, however, had only dogs to lick the wounds that covered him like a garment of shame.

Possessed by Our Possessions

We have a society of many willing workaholics with low civic participation, families falling apart, unsupervised children, and lonely old people.