Volume > Issue > The Cathedral of Business 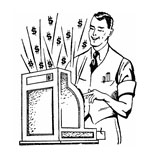 The Cathedral of Business

By Norman Lear | April 1993
Norman Lear is an Emmy Award-winning television writer/producer, and head of Act III Communications in Los Angeles, which pursues acquisitions and/or the crea­tion of businesses within the entertainment and commu­nications spheres.

Ed. Note: Norman Lear has had his finger on the pulse of America for decades. What he says here about the American condition cuts strongly against the grain of fashionable opinion, and, even though confessing Christians might want to rephrase certain locutions, deserves careful attention. This article was originally delivered as a talk to a Joint Faculty Seminar of the Harvard Divinity School and the Harvard Business School last year.

My belief that there is a touch of the ri­diculous in every human situation is not in the least diminished by my appearance here today. You know me primarily as a writer/producer of primetime television entertainment — that’s the stuff between the ads for pantyhose and Drano — the man who brought you Archie Bunker, George Jefferson, Fred Sanford, and Mary Hartman, arguably four of the least-edu­cated characters ever to be seen on television — and here I am to share my insights regard­ing the dialogue taking place between the schools of Divinity and Business at Harvard University. Ain’t that a riot?

If my mother were alive today, and I call­ed to tell her that Dean Thiemann had asked me to address this formidable group, I’m cer­tain that her response would be just what it was when I phoned her one morning some years ago to tell her that the Television Acad­emy of Arts and Sciences had just notified me that I was to be among the first inductees into its newly formed Hall of Fame. “Listen,” she said. “If that’s what they want to do, who am I to say?”

I accepted your invitation to speak today with some trepidation. I was never the student I hope my brand new grandson and his uncle, my 3-1/2-year-old son, will be. I left college — Emerson College here in Boston — before completing my sophomore year to enter the service in World War II, and was never able to return.

Niebuhr believed that many of the values of democratic society, while highly prized in the West, are neither understood nor desired outside the West.