Volume > Issue > Shelter From the Storm 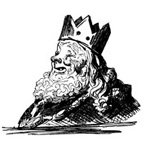 By Elaine Hallett | June 2012
Elaine Hallett is co-author, with her husband, Charles, of The Artistic Links Between William Shakespeare and Sir Thomas More: Radically Different Richards (Pal­grave Macmillan, 2011), a study of Shakespeare's Richard III and its eloquent source.

Anyone who remembers Shakespeare’s vital Tragedy of King Lear might think first of the storm scenes at the center of the play, envisioning Lear himself, who has just been driven out onto a desolate heath where, as Shakespeare tells us, “the night comes on, and the high winds / Do sorely ruffle,” and “for many miles about / There’s scarce a bush.” These scenes focus on a man who is at odds with and isolated from the world, simmering in his injured pride, frustrated and humiliated by his inability to exact a full measure of vengeance upon his oppressors. Nothing about Lear as he enters Act 3 has the least relish of salvation. He is an embodiment of fury. One must inevitably praise Shakespeare’s inspiration to render the interior storm that was raging within the aged King through a poetic creation of an exterior storm that makes the third act of this play so moving and so memorable. Shakespeare’s achievement in Act 3 of Lear is so stupendous that readers and viewers alike are mesmerized by “the vastness of the convulsion.”

The tempest in Lear’s mind far surpasses the fierce storm afflicting his body and so amazes the distressed King that he eloquently contrasts the two:

Thou think’st ’tis much that this
contentious storm
Invades us to the skin; so ’tis to thee;
But where the greater malady is fix’d,
The lesser is scarce felt. Thou’dst shun a bear,
But if thy flight lay toward the roaring sea,
Thou’dst meet the bear i’ th’ mouth.

Any actor who would understand the role must heed what Lear himself says about his relationship to the storm: He cannot feel it. “When the mind’s free, / The body’s delicate,” Lear tells his servant. But Lear’s mind is captive to a rage so intense that he feels as though he were “bound / Upon a wheel of fire, that mine own tears / Do scald like molten lead.” The tempest in his mind “Doth from my senses take all feeling else, / Save what beats there — filial ingratitude!” What is it, he asks, that “stirs these daughters’ hearts / Against their father”? The callous actions of Goneril and Regan, who have shut their doors against him on this wild night, seem inexplicable, unnatural.