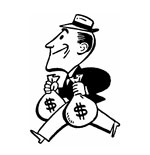 Recovering the Virtue of Prudence in an Age of Fraud

By Tom Bethell | March 2009
Tom Bethell is a Contributing Editor of the NOR and the author of The Politically Incorrect Guide to Science (Regnery, 2005)

The financial crisis of recent months has been more severe than anything seen for decades. Comparisons have been made to the Great Depression, but the two events are dissimilar in many ways. The Depression lasted for ten years and was a period of real economic hardship for millions of people. Today, the country is still rich, although less so than it was. Still, there was a financial crash starting in October 2008. It has been a period of financial instability and, for many, real anxiety. The money that seemed to be available for retirement is no longer there.

The present crisis — the word for once is not just hyperbole — was as abrupt as a precipice and unforeseen by watchdogs in Washington and experts on Wall Street. Books will be written about this unprecedented event, and because it was unprecedented we don’t know how it will end. It is especially worrisome because a nearly simultaneous tumble occurred in advanced economies all across the world.

It is instructive to note that the economic and the moral are not entirely unconnected when it comes to this present crisis.

The underlying problem was that credit was extended far beyond what makes sense in any rational, productive system. We have heard about the Ponzi scheme of Bernie Madoff, but the ever-increasing expansion of credit on an inadequate base was unsustainable. It, too, had Ponzi-like properties.

Bodies for Sale: The Inhuman Face of Industrialism

Industry everywhere, East or West, wheth­er controlled by the state or market forces, has no veneration for the Presence of the Godhead in the soul of the worker.

The Triumph of Capitalism — or the Rise of Market Totalitarianism?

My colleague suggested, "Some people believe human life is priceless." The government expert replied, "We have no data on that."