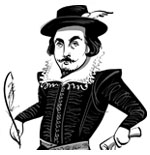 WHAT HAS HISTORY REVEALED?

By Keith Hopkins | July-August 2013
Keith Hopkins is an English lawyer and historian. In 2007 he won the Shakespeare Birthplace Trust award for a review of The History Plays.

An intense debate, which shows no sign of subsiding, has been ongoing for some years on the religious beliefs and affiliations of William Shakespeare. This is only natural. Shakespeare is the English language’s all-time greatest writer and dramatist. He is universally acknowledged as an artist of almost limitless capacity and ability, who created unforgettable characters of dazzling variety and complexity. There is an abiding interest in just what made such a genius tick. We would like to know what he believed in, what his worldview was, where he stood on the great religious and political issues of his day, and, perhaps most revealingly, what his plays tell us about all or some of these things.

For about 250 years after his death, the establishment “take” on Shakespeare was that he toed the line. He was a great Elizabethan artist who celebrated, in plays and verse, the glorious reign of Queen Elizabeth I; he was a social, political, and religious conservative; he was a man who knew on what side his bread was buttered, and who didn’t make waves. Importantly, the older view was that his plays could not teach us much about the man because he was an artist who was writing in splendid isolation from his age, as if there were an iron curtain between the man and the times in which he lived.

These simplistic notions began to come apart in the early part of the twentieth century when new methods of textual analysis and a new historical methodology began to undermine the foundations of the pedestal on which Shakespeare had been raised. In the past ten to fifteen years the pace has quickened, in tandem with wider questions about the authorship of the plays generally. Writers such as Richard Wilson and Claire Asquith have argued that Shakespeare was a crypto-Catholic, but that the dangerous times in which he lived meant that he had to use code words and phrases in his plays to disguise his real beliefs and sympathies. This has been challenged, even ridiculed, by the doyen of Shakespeare studies, Stanley Wells, the keeper of what might be called the sacred flame of Shakespearean orthodoxy and the leader of the Stratfordian school. He makes the point, reasonably enough, that if the Bard did write in code, it could never be proved. Asquith, he asserts, “finds hidden and arbitrary meanings [that] have surface meanings [and] that require no further elucidation” (Is It True What They Say About Shakespeare?).

Shakespeare’s plays are indeed so rich and complex, even on their surface, that to examine them in further detail would seem to be an unbelievable and monumental task. Writing in a code surely means that one wants something to remain secret so that it can be interpreted only by those in the know and denied in the face of questioning by those who want to know for hostile purposes. But is there such a code in the plays? What can we say, if anything, about the Bard’s religious and political views and how, if at all, are they woven into the plays themselves?

Shelley’s novel can be read as a validation of the family, marriage, and natural human values in contrast to the overreaching desires of the prideful scientist.

The Empty Self vs. the Rich Soul

The inner life of man is a world copiously rich and full, capable of loving and knowing, and designed to grasp the transcendentals of truth, goodness, and beauty.