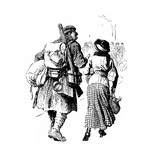 ESCHEWING SECURITY, HEADING FOR THE PERIPHERIES

Novelty often seems to contain within it a disregard for tradition. The two previous popes lived through what appears to have been the destruction of European civilization, of which the concentration camps are perhaps the most apt symbol. These popes’ concerns were largely to save Europe for the faith, and to save the faith for Europe and the world. Although St. John Paul II in particular reached out to the entire world, he remained profoundly rooted in the Catholic tradition of a Europe that had once been Christendom: His journeys were missions from that base.

Though John Paul called himself a pope “from a far country,” his homeland is but a long day’s drive from Rome. It is really Pope Francis who comes from the other side of the world. In a remarkable way, Jorge Bergoglio — son of northern Italy, though born in Argentina — returned to Europe from a different continent, and a different way of seeing reality. With the transition from “old world” popes to a “new world” pope, it is as if the settings on a kaleidoscope that had been fixed for many centuries were suddenly turned. In C.S. Lewis’s Chronicles of Narnia, Lucy Pevensie opines that people from south of the equator are so different because they spend all their lives “upside down.” Sometimes the differences between Francis and his predecessors are so striking that one is tempted to agree with her.

In a manner of speaking, we are all “on pilgrimage with Pope Francis.” What does it mean to be a pilgrim? A pilgrim has to be poor, has to be open to whatever God may give him. A pilgrim leaves settled routines, securities of all kinds, to place himself unreservedly into the hands of God and God’s providence. It is this leaving of all security in things of tradition and custom that Pope Francis seems to be accentuating. He seems to be calling those of us who live in the New World to share deeply in his own desire to “make all things new” in Christ, without being hamstrung by “the past.”

We believe that our system of government secures freedom of religion. But, says Craycraft, we are deluded.