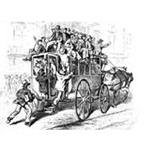 My Antonia. By Willa Cather.

Jim Burden, the narrator and protagonist of Willa Cather’s 1918 classic My Antonia, is a successful New York attorney. He has achieved the American dream imagined by so many generations of immigrants: financial independence, a law degree from Harvard, a rich wife from a well-connected East Coast family, and an occupation — Jim is legal counsel for one of the great Western railways — that allows him the freedom of travel. What makes this all the more impressive is that, at age ten, the orphaned Jim Burden moved from his native home in Virginia to live with his grandparents on the harsh Nebraska plains in the unforgiving pioneering years of the 1880s. From there, after learning self-reliance and acting on a natural curiosity about the world around him, he moved to the nearby town of Black Hawk for high school and then to Lincoln to study classics at the University of Nebraska, where an encouraging professor and mentor convinced him to uproot himself once again to continue his studies at Harvard.

Cather’s novel opens with a brief introduction of Jim as a successful adult. He’s on one of his trans-continental railway rides when, somewhere amid the never-ending miles of ripe wheat in Iowa, he happens upon a childhood friend who grew up with him in the little prairie town. While catching up, they both realize their nostalgic talk keeps coming back to one central figure, Antonia Shimerda, a Bohemian immigrant girl whom they had both known long ago. “More than any other person we remembered,” says Jim’s childhood friend, “this girl seemed to mean to us the country, the conditions, the whole adventure of our childhood.” It quickly becomes clear that Jim has never stopped thinking of her; he admits that on his long train rides traversing the continent, he’s been writing down what he remembers about her, and those memoirs become the first-person narrative of Jim Burden.

What also becomes clear is that, although Jim is by all rights a successful man, he is not a particularly happy one. Most consequentially perhaps, his society wife shares little of Jim’s quiet tastes and familial desires; she’s more interested in playing patroness to “a group of young poets and painters of advanced ideas and mediocre ability” than in starting a family with Jim, a point that seems to weigh heavily on him. Nor does his professional and financial success appear to give him any true consolation or happiness. In fact, one could be forgiven for concluding that what little happiness he has is tied only to his wistful memories of Antonia and the cathartic experience he gains by writing down these memories of her.

Recovering the Vocabulary of Faith

Good fiction uses the events and tensions of everyday life on one level to draw us deeper and deeper into the writer’s perception of truth or real­ity on another.