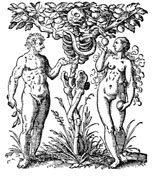 THE QUEST FOR ADAM & EVE

By Dennis Bonnette | July-August 2007
Dennis Bonnette retired in 2003 as Professor of Philosophy at Niagara University in Lewiston, New York, where he was Chairman of the Philosophy Department from 1992 to 2002. He is the author of two books, Aquinas' Proofs for God's Existence (Martinus-Nijhoff, 1972) and Origin of the Human Species (Sapientia Press, 2003; 2nd edition, 2007, with a new Foreword by biochemist Michael J. Behe). His website is www.origin.youshoppe.com.

While controversy swirls around whether Intelligent Design theory can somehow indicate God’s existence, we ought not to forget that Catholic tradition has always held that God’s existence can be known by the light of unaided reason, and this by metaphysical not empirical, scientific argument. Still, even knowing that God exists, many people today fear that there is inherent conflict between the scientific claims of evolutionary theory and the Genesis account of Adam and Eve. Seeking to find a scientific foundation for Genesis, many Christians have embraced the young-earth creationist movement that (1) rejects evolution theory, and (2) insists that mankind is perhaps 6,000 years old and the universe some 10,000 years old — consistent with a literalist reading of the patriarchal genealogies found in the Book of Genesis.

Still, the vast majority of mainstream natural scientists maintain that (1) evolution theory is factual, (2) the cosmos is some 12 to 15 billion years old, (3) life on earth goes back nearly four billion years, and (4) man himself gradually evolved over millions of years. Thus, many Christians today wonder how to reconcile the general acceptance of mainstream science with belief in Adam and Eve’s historicity. While many liberal theologians see little need for Adam and Eve to be a single pair of first parents, authentic Catholics and many traditional Protestants understand that theological monogenism — which holds that all mankind is descended from a single pair of ancestors — must be maintained in order to confirm the reality of Original Sin, and the consequent need for the Redeemer. My book Origin of the Human Species is a philosophical work on evolution in which I offer a detailed explanation of how the current theory of human evolution might be fully consistent with sound scriptural interpretation.

If we don’t know what constitutes genuine human nature, then there is no way to detect when and how true man first appeared. Philosophical psychology is the science that studies human nature and tells us how it distinguishes us from lower brute animals. Animals can experience sensations, such as color, shape, sound, movement, touch, and so forth. Man can do all that, plus he has intellective knowledge and free will. Because man possesses an intellective spiritual soul, he can understand the natures of things, make judgments, and reason. Thus, while animal cognition is forever bound to the singular and concrete sense experiences of its immediate surroundings, human intellective knowledge transcends sensation to grasp the universal truths of the cosmos itself, write poetry, erect civilizations, and investigate science and theology. Man alone consciously reflects on the meaning of his own existence and reads and writes articles about his possible evolutionary origins.

Animals can make tools. Perhaps the most famous example of primate tool-making abilities is the “termite-fishing” chimps reported by Jane Goodall. These clever African primates break off grass reeds and carry them some distance to termite mounds, where incautious termites will crawl onto the reeds inserted into their mounds — quickly becoming food for the chimps. Such behavior, and others like it, though impressive, can be explained in terms of environmental “programming.” The chimps can initially learn the behavior by happy accident followed by habit formation reinforced by the pleasurable outcome. Transmission to the rest of the colony arises from simple imitation. Some anthropologists, including Goodall, appear unaware of widespread animal tool use — for example, sea otters and a Galapagos finch that routinely use rocks to obtain food, spiders that use throw nets, or even the universal propensity of birds to make nests as egg-holding devices.

The Cell Declares His Handiwork

The evolution wars continue, although less frequently these days in the headlines. Perhaps that’s because…