Volume > Issue > May You Live to See Your Children's Children 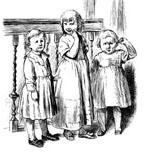 May You Live to See Your Children’s Children

By Leland D. Peterson | November 2004
Leland D. Peterson is Emeritus Professor of English and Latin at Old Dominion University in Norfolk, Virginia. His scholarly articles have appeared in such periodicals as Modern Philology, PMLA, and Harvard Library Bulletin.

I speak not as a professor on this subject, but as a layman who has experienced what most of humanity has lived through from the beginning of our species. Truly, in what seems like the blink of an eye, I find myself eight years beyond three-score-and-ten, with 53 of those years passed in the sometimes stormy companionship of one woman who has been the mother of our four children, all living and married, who are the parents in turn of our 13 grandchildren with one more expected soon. Our grandchildren span two decades, from ages 22 to 2.

On our 50th wedding anniversary, our youngest daughter arranged for a photograph of all of us under a shade tree in May, and that enlarged picture now has the place of honor in our front room. I must say, as I pass judgment on a life of 78 years, that almost everything I accomplished of any lasting value is in that picture.

I have taught for 38 years, and hope that I have been a part of the good influences that enriched the lives of my students. We have a modest savings account to pass on to our children, including a mortgage-free house. At age 78, however, with our physical wants and needs much restricted, money is not a major satisfaction for us, though we are well aware of the discomforts and trials of poverty that could be ours if some things took a turn for the worse. Whatever the future may bring, we know that few years on earth remain to us. The afterlife is of monumental importance.

This is a letter to the grandchildren, the grandsons in particular, about choices they will make in life, and the consequences that follow from certain choices. The initial choice has to do with marriage and ultimately the raising of families. It is my hope that all of our grandchildren will marry and have children of their own, despite the possibility that raising children may involve problems, even heartbreaks, because it offers some of the profoundest rewards this life has to offer. If some choose the single life, it is my hope that the choice will mean a chaste life dedicated to some important end for humanity, such as nursing or church ministry. The choice I especially wish to discourage is homosexuality, the road that may well lead to depression, despair, mental and physical illness, and HIV infection ultimately followed by AIDS, that terminal disease.

All of my warnings come from publications secured from Lambda Rising, the “gay” bookstore in Norfolk, Va., the four publications being the Washington Blade newspaper (May 7, 2004) and three magazines, The Advocate (May 11, 2004), POZ (May 2004), and m2m (Summer 2004). All are public-relations journals designed to glamorize, normalize, and sell the homosexual choice as the most exciting and rewarding way of life possible, especially for the young. Read from the perspective of a grandfather whose life was neither spectacular nor dull, but long and rewarding (even in its last chapters), the homosexual life is not a prudent choice if longevity is valued.

Reviews of Discipline That Lasts a Lifetime by Ray Guarendi... The Privilege of Being a Woman by Alice von Hildebrand... Journey of Faith: Catholic Marriage Preparation by Deacon Roy Barkley...

Acne on the Chin

The San Francisco Board of Supervisors has caught up with the Episcopalians.