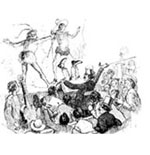 By F. Douglas Kneibert | July-August 2015
F. Douglas Kneibert, a retired newspaper editor and a convert from Protestantism, is a former vice chairman of the board of directors of the Vitae Foundation, which uses the mass media to promote a culture of life.

As the Second Vatican Council was winding down in 1965, the Council Fathers turned their attention to a previously unexamined topic: the Catholic laity. They devoted an entire decree to the “Apostolate of the Laity,” Apostolicam Actuositatem, clarifying the laity’s role and responsibilities in the Church as “the people of God” responding to the universal call to holiness. In Lumen Gentium, the “Dogmatic Constitution on the Church,” the Council Fathers went a step further, proclaiming the laity to be endowed with the sensus fidei, a divinely inspired “sense of the faith” that instinctively protects them from error: “The whole body of the faithful who have received an anointing which comes from the holy one…cannot be mistaken in belief. It shows this characteristic through the entire people’s supernatural sense of the faith…when it manifests a universal consensus in matters of faith and morals.”

One reads those words today with a wistful sense of regret over what has been lost in the fifty years since they were written. Was the Church ever like this? In the mid-1960s such a claim might still have been plausibly made. But storm clouds laden with social, cultural, and religious tumults were gathering even then, and would leave no area of society untouched.

Although the tempestuous changes manifested in different ways, they all had one element in common: the rejection of authority. “Never trust anyone over 30” became the battle cry, and challenges to the existing order were launched in the familial, educational, and sexual realms, among many others.

Religion and moral standards were not unaffected and became increasingly marginalized as a series of new “isms” arose. Radical individualism gave rise to moral relativism and indifferentism in religious belief (to the extent that belief continued to exist at alb~ These trends are still with us, and indeed have accelerated, and the sensus fidei, to the degree it still exists in the Catholic Church today, falls far short of the vision expressed in Lumen Gentium. Let two examples among many suffice, one in the area of faith and the other in morals.

Reviews of The New Republic Reader... Dictatorship of Virtue... Catholic Universities in Church and Society... The Challenge and Promise of a Catholic University... Our Greatest Gift: A Meditation on Dying and Caring... To Hunt, to Shoot, to Entertain: Clericalism and the Catholic Laity... ...

What Is the Purpose of This World?

God took a risk in inviting, not demanding, our acceptance of salvation. The invitation can be accepted, or it can be rejected.

In our December 1984 editorial, we needed to ap­peal to you, our subscribers, for donations…