Volume > Issue > How the West Was Lost 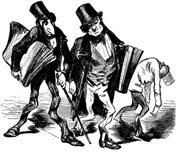 Across from the Brennan Courthouse on Baldwin Avenue in Jersey City is St. Joseph’s Roman Catholic Church, tucked away in an unassuming, tree-lined neighborhood just below Journal Square. On the corner of Baldwin and Newark Avenues, to the left of the main entrance to the church, stands a humble plaque dedicated to the 661 parishioners who fought in World War I. It is a simple memorial, hardly noticeable except for the rosebush and miniature American flag sentry at its base. Perhaps it was intended to be this subtle because these brave men considered service to their country nothing exceptional — it was simply their patriotic duty. The rest of us, however, remember them as heroes.

Consider the implications of that number, six hundred and sixty-one. St. Joseph’s is not the largest church in town or the most magnificent. It is rather ordinary — in a charming way. Yet, such extraordinary parochial contributions were commonplace during both World Wars. Every Catholic church in Jersey City has a similar memorial or plaque commemorating the wartime sacrifices of its parishioners.

One can state with absolute certainty that Nazi fascism would not have been defeated without this fundamental fighting spirit. By 1945 more than 16 million Americans had served in World War II, or approximately 11 percent of the total U.S. population. It is estimated that 32 percent of these American soldiers were Catholic and 65 percent Protestant. (The remainder were Jewish or “other.”) It is also noteworthy that many of these Catholic soldiers were only a few generations removed from their immigrant roots at the time of their enlistment, and the U.S. had not fully reconciled with its changing Christian identity and anti-Catholic undercurrent. Nonetheless, these Catholics readily fought for God and country.

Much has changed since then. Today, the active component of the U.S. military numbers about 1.3 million servicemen, or less than 0.5 percent of the total population. Granted, modern militaries are far more advanced and better equipped. The field of battle is also more dynamic, less clearly defined, and constantly in flux. God willing, the pitched battles and devastating warfare of the 20th century will remain a chapter in our history books that never again needs to be written. But the sacrifices of our uniformed men and women are no less herculean now than they were 75 years ago.