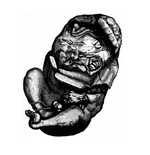 By Anne Barbeau Gardiner | January-February 2012
Anne Barbeau Gardiner, a Contributing Editor of the NOR, is Professor Emerita of English at John Jay College of the City University of New York. She has published on Dryden, Milton, and Swift, as well as on Catholics of the seventeenth century. A version of this article was originally presented at a meeting of the United Faculty for Life.

Two influential academics died in 2003 whose work in the area of post-humanism is still highly regarded in the academic world. The first is Garrett Hardin, a biologist who taught human ecology at the University of California at Santa Barbara; the second is James Rachels, a philosopher and medical ethicist at the University of Alabama who was credited in The New York Times with igniting the euthanasia debate. Both of these men expressed a thoroughgoing contempt for human nature and saw nothing wrong with consigning the weak among us to a cruel death. That each rose to the top of his profession reveals how completely the secular academic world has embraced the culture of death.

Garrett Hardin considered “traditional thinking” to be “deplorably nonnumerate.” Christianity, he claimed, is especially deficient in this area, having developed before there was “much appreciation of the importance of numeracy.” The language of Christianity is especially problematic: “People need to be made allergic to such thought-stoppers as infinity, sacred, and absolute,” Hardin wrote. “The real world is a world of quantified entities: ‘infinity’ and the like are not words for quantities but utterances used to divert attention from quantities and limits.” Thus, he dismissed as nonexistent the transcendence of man over the material world. The great task before us, Har­din asserted, is to “marry” ethics to scientific numeracy.

In keeping with his insistence that reality consists only of quantified entities, Hardin began agitating for legalized abortion as far back as 1963; he spent the next forty years of his life promoting population control. This is why he heartily approved of the comparison made in 1955 by Alan Gregg, vice-president of the Rockefeller Foundation, between the spread of humanity and “the metastasis of cancer.” This comparison was meant to justify the starvation of people in densely populated areas: “Cancerous growths demand food; but, as far as I know, they have never been cured by getting it,” Hardin explained. For him, man is not the crown of creation made in the image of God, but rather earth’s invasive disease.

Hardin is most famous for “The Tragedy of the Commons,” his Presidential Address to the American Association for the Advancement of Science (Pacific Branch) in June 1968. Published in Science magazine later that year, it became one of the most widely read of all environmental works. In this highly influential essay, Hardin argues that we need to get rid of traditional morality because it makes “no allowance” for overpopulation. There is no warrant in nature for the traditional belief in the “sanctity of life,” he claims, because an individual life is “cheap, very cheap” where there is “a surplus of demanding human flesh.” His phrase surplus of flesh turns human beings into a vast quantity of superfluous meat. Of course, an individual life would be significant if there were too few people on earth, but instead of a shortage we have — and here he coins a quantifying word — “a longage of people.”

Review of Inferno and Purgatorio by Dante, translated and edited by Anthony Esolen

In a future dominated by a technology that doesn’t make us any happier or less alienated, we fallen beings will have to make an effort to acquire virtue and the spiritual life.