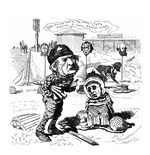 In 1726 essayist and poet Jonathan Swift published his magnum opus, now regarded as an indisputable classic of English literature. Gulliver’s Travels is both a satire on human nature and a parody of popular travel narratives of the day. Swift’s satirical fury — William Makepeace Thackeray called it “furious, raging, obscene” — is directed against almost every aspect of early-18th-century British life. The tale recounts the expedition of Lemuel Gulliver, a practical-minded former surgeon turned captain of the high seas, who sets sail in his aptly named ship, The Adventure, to visit “several remote nations of the world.”

The most well-known scene of Swift’s satirical tour de force is Gulliver’s shipwreck on Lilliput, an island inhabited by a race of six-inch-tall people who enjoy arguing over trivial matters, such as whether boiled eggs ought to be cracked open at the big end or little end, a clever parody of contemporary British political and religious disputes. It is here on the shores of Lilliput where the brave traveler awakes to finds himself a god-like giant bound by a thousand tiny threads. His Lilliputian captors regard him with awe — and later use him as their personal Goliath to subdue the neighboring Blefuscudians. Swift’s satire is on full display when Gulliver is charged with treason for publicly urinating in the capital, even though he was doing so in order to douse a raging fire.

Later, in the kingdom of Brobdingnag, Gulliver (like Lewis Carroll’s 19th-century Alice) finds the tables have turned: Here, he is a tiny man in a country of giants who treat him as a zoological curiosity and exhibit him for money.

Through Gulliver’s subsequent experiences with the philosopher-citizens on the flying island of Laputa, Swift spoofs the speculations of scientism. The Laputans are so obsessed with theoretical science — they contemplate ways to extract sunbeams from cucumbers, for example — that they have to be reminded to listen to and speak with one another. Then there’s the land of the virtuous horse-like Houyhnhnms, whom Swift contrasts with the Yahoos, vicious brutes who bear a disturbing resemblance to humans.

Here we review Cyborg Mind: What Brain-Computer and Mind-Cyberspace Interfaces Mean for Cyberneuroethics.

See how three authors — in varying degrees of sympathy with, or hostility toward, Christianity — expressed their conception of the basic struggle between good and evil.

Good books aren’t highways or avenues of mass transport. They’re foot trails, the kind that are traveled single file or not at all.