Volume > Issue > Fatherhood & Fertility in The Last of the Mohicans 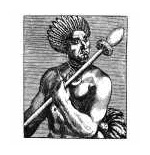 Fatherhood & Fertility in The Last of the Mohicans

STRUGGLE FOR THE AMERICAN SOUL

By Eric Seddon | July-August 2009
Eric Seddon is a writer in Cleveland. His scholarly work has appeared in both British and American journals on a wide range of subjects pertaining to the interaction between culture, religion, and the arts. This article is part of his ongoing study of American Poetics.

It is a wild romance, like a river with tributaries and rapids shooting from all directions. Semi-comedic episodes intermingle with terrifying darkness, history vies with romance, the plot lurches, drags, and sprints until one peak among many, like one of the Adirondacks in which so much of the book is set, looms in stillness above the rest. Just when it seems as though the multitudinous strands of symbolism in James Fenimore Cooper’s The Last of the Mohicans (1826) cannot possibly be tied together in time for the finale, a silence falls over the book as Cora Munro, the book’s heroine, pleads desperately to Tamenund, the Lenape chief, in a final attempt to spare herself and her sister from being handed over to the Huron tribe. The moment is a study in character and symbolic depth:

Cora bowed her head…and, for a bitter moment struggled with her chagrin. Then, elevating her rich features and beaming eye, she continued in tones scarcely less penetrating than the unearthly voice of the patriarch himself: “Tell me, is Tame­nund a father?”

Adding power and symbolism to the question is Tame­nund’s answer, framed in majestic prose:

The old man looked down upon her from his elevated stand, with a benignant smile on his wasted countenance, and then casting his eyes slowly over the whole assemblage he answered: “Of a nation.”

The beauty of this moment conjures up sensations that range from Abraham, who was told by God that he would be “a father of many nations” (Gen. 17:4), to George Washington, already revered in Cooper’s day as the father of the young American Republic. Yet it is also haunting, because we know that Tamenund’s nation is disappearing, and that the time for the destruction of his people is at hand. Symbolically, then, there is a tension between these visions of fatherhood: Will Washington’s fatherhood be permanent, like Abraham’s, or is it destined to fall, as did Tamenund’s? In Tamenund’s answer is posed a further question to a young nation building upon the ruins of an older one.

In his Confessions St. Augustine recounts an episode from his childhood in which he and…

At times Christian writers have entered that exclusive realm where profound insight into the wisdom of Christianity joins artistic merit to produce fiction of a higher order.