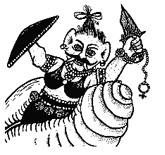 Dan Brown’s The Da Vinci Code has become a cultural phenomenon. One website described it as a “monster bestseller.” Released in the spring of 2003, it reigned supreme as the number-one bestseller in fiction for the remainder of that year and for most of 2004. It is by far the most popular recommended novel in “book of the month” clubs, discussion groups, recommended reading lists, and coffee houses across America. People who read little or no serious or scholarly works on history, archaeology, or religion are reading The Da Vinci Code and priding themselves on their knowledge and sophistication, taking their cues from Dan Brown’s armchair knowledge of French phrases and culture, European history, and “inside knowledge” of what all those old Church leaders were really “up to.” Famed movie producer/director Ron Howard is reportedly working on the screen adaptation, which “film info” websites project for release in 2005 or 2006 (both years are listed, depending on which site one visits).

The book’s sheer popularity has garnered the attention of those whom it portrays negatively, namely Christians. The flagship orthodox Catholic response is the book The Da Vinci Hoax

(Ignatius Press, 2004) by Carl Olsen and Sandra Miesel, which Chicago’s Francis Cardinal George called “the definitive debunking.” Evangelical Protestants have responded as well, perhaps because of their own realization that a popular novel asserting that the basic tenets of early Christianity are a bunch of “bunk” implicates their beliefs as well. One noteworthy Protestant response (among several) is The Truth Behind the Da Vinci Code

(Harvest House, 2004) by Richard Abanes. At less than 100 pages, it is an excellent compact resource that quotes from numerous reliable sources (including the articles by Miesel and Olsen which led to The Da Vinci Hoax).

Unfortunately, many members of the general public who breezed right through The Da Vinci Code are not likely to read the books that so ably refute its errors. Why not? Because those books are weighted with facts: They are not fast-paced thrillers made to keep the reader on the edge of his seat; rather, they are solid, accurate, and scholarly exposés, made to keep the reader firmly seated in the truth. Real scholars who know the truths of history scoff at Brown’s fabrications. Furthermore, with regard to The Da Vinci Hoax, the thousands and perhaps millions of readers who eagerly found time to read The Da Vinci Code have already pre-judged the Catholic Church as indefensible, and will therefore give no serious attention to any book that presumes to defend her.

For over a year, I studiously ignored Dan Brown’s novel. Then, a number of people close to me read it and said they enjoyed it. Each of those people — except for one — had been raised, married, and had their children baptized in the Catholic Church. I wondered if they were so caught up in the “thriller” aspect of the novel that they failed to notice what it was saying about the faith they professed, or if it might be influencing them (possibly along with other factors) to cease to profess it. One day, I was recommending The Da Vinci Hoax to a sister-in-law who had read Brown’s novel after her neighborhood discussion group selected it. She asked if I had read The Da Vinci Code. With some embarrassment, I had to admit that I had not. Shortly thereafter, I purchased a used copy from a seller on eBay (that way, my conscience was clear that I was not contributing to the author’s profits) and read it, cover to cover, while doing simultaneous “reality checks” in The Da Vinci Hoax, The Truth Behind the Da Vinci Code, and other “non-partisan” references such as the Encyclopedia Britannica.

After reading the novel, I was inclined to agree with the authors of The Da Vinci Hoax that it constitutes a very serious and deceptive attack on the Catholic faith; and that those who say, “oh, it’s just fiction” or “it’s just harmless fun” are blind to — or simply ignoring — Brown’s clearly stated intentions, as documented in the books that expose him. The Truth Behind the Da Vinci Code quotes Brown: “One of the many qualities that makes The Da Vinci Code unique is the factual nature of the story.” The Da Vinci Hoax also contains copious documentation of the novel’s claims to a factual basis behind the fiction: for example, this exchange, quoted from the Today show: