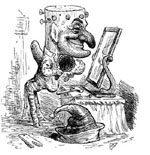 Beware! The New Age Movement Is More Than Self-Indulgent Silliness

TYRANNY IN THE NAME OF TOLERANCE

By Lee Penn | July/August 2000
Lee Penn, a health-care information systems consultant in San Francisco, is a member of Our Lady of Fatima Byzantine Church, a parish of the Russian Catholic Church (one of 21 Byzantine Catholic Churches in communion with the Holy See).

In recent years the New Age movement has come out of the closet in the Church and in the world. The New Age movement is made up of those who follow a potpourri of beliefs and practices that fall outside the boundaries of traditional Christianity. Its manifestations are protean. Some Catholic nuns walk on labyrinths to contact the “Divine Feminine.” Increasing numbers of health insurance companies have heeded consumers’ demands to cover offbeat treatments, ranging from Ayurvedic herbal medicine to “therapeutic touch” — in which a “healer’s” hands manipulate “energy fields” but never touch the patient’s body. Hillary Clinton has contacted the spirit of Eleanor Roosevelt under the guidance of Jean Houston — a New York-based avatar who runs a “Mystery School,” and who inspired the current fad of walking on labyrinths. Millions of Americans with more money than commonsense are buying into this trendy, feel-good style of spirituality; they have helped to keep Neale Donald Walsch’s Conversations with God on the best-seller lists since 1997. These are the people who proudly say, “I’m spiritual, but not religious.”

Many Christians view the New Age movement as merely self-indulgent silliness. Unfortunately, there’s far more to the movement than astrology, crystals, weird workshops, and psychobabble. New Age spiritual leaders have a firmly entrenched anti-Christian worldview, and many of them harbor a special hatred for the Catholic Church. Many believe that the Fall was really man’s ascent into knowledge, assisted by Lucifer  whom they hail as the bringer of light and wisdom. Many expect an imminent, apocalyptic transformation that will lead humanity into the New Age. By acts of men or by an act of “spirit,” earth will be cleansed of those who refuse to evolve. In the New Age, there will be world government; the economy will be remade to promote “sharing.” Traditional morality and traditional families will disappear. Orthodox religions — especially Christianity and Judaism — are considered “separative” and “obsolete”; in the New Age, they too will vanish.

For the last 125 years, New Age leaders worldwide have followed the false light of Theosophy; they now whisper into the itching ears of the powerful — politicians, media moguls, UN officials, foundation grant-makers, and Anglican bishops. As the West moves into a post-Christian era, the influence of the New Age movement grows.

Helena Petrovna Blavatsky blended Eastern religion with Western occultism, establishing the Theosophical movement in 1875 in New York City. Theosophy has influenced occult, spiritualist, “New Thought,” and New Age movements around the world ever since. For Blavatsky, the LORD is not God; mankind is. She says, “Man is truly the manifested deity in both its aspects — good and evil.” Since mankind is god, it follows that “mankind will become freed from its false gods, and find itself finally — SELF-REDEEMED.” Or rather, some of mankind is “god-informed” and capable of self-redemption — namely, “the Aryan and other civilized nations.” Others, “such human specimens as the Bushmen, the Veddhas of Ceylon, and some African tribes” are “lower human creatures,” “inferior races” that are “now happily…dying out. Verily mankind is ‘of one blood,’ but not of the same essence.”1

Do you remember the “Masters of the Universe”? Even if you weren’t introduced to them…

Fire Alarms in the Night

Stratford Caldecott calls for a "new movement" that amounts to a New Ager-Catholic dialogue.

Beware! The New Age Movement Is More Than Self-Indulgent Silliness

New Age teachers invert Christian doctrine about sin, the Devil, and the Fall.